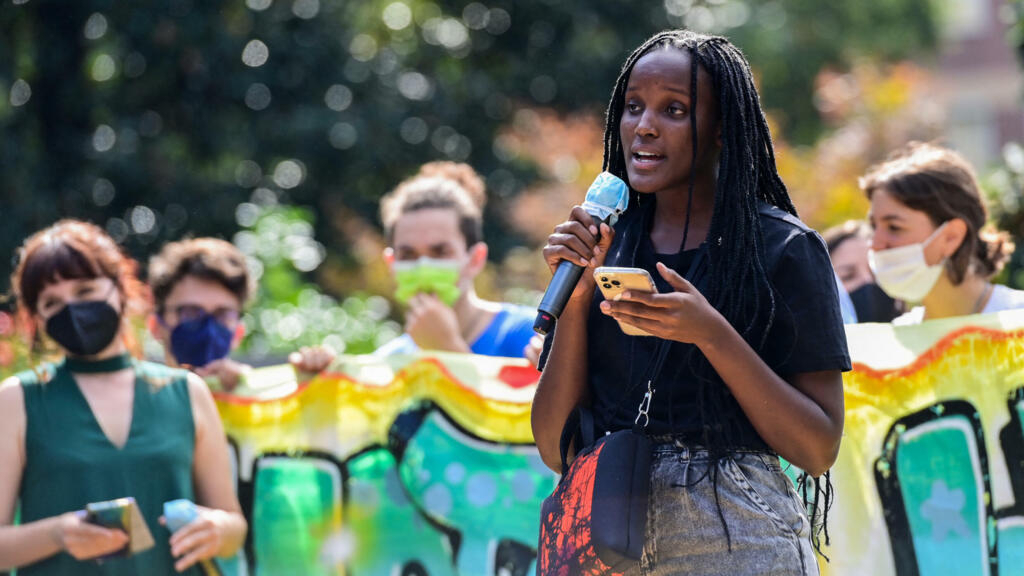 Still unknown to the general public three years ago, environmental activist Vanessa Nakate attends COP26 alongside Greta Thunberg. Portrait of this Ugandan activist determined to have Africa’s interests recognized in the fight against climate change.

At the World Economic Forum in Davos in 2020, Vanessa Nakate, one of the spokespersons for the climate generation, is pictured alongside activists Greta Thunberg, Loukina Tille, Luisa Neubauer and Isabelle Axelsson. The environmental activist, who is the only black woman in the photo, discovers she has been cut and is outraged on Twitter.

@AP I have seen that you have changed the photo without any explanation at all!

Tell everyone why you cropped me out of the photo !!

You have caused all the damage there is! pic.twitter.com/drx4WHuVtK

This episode only strengthened his fight for better representation of African countries in the fight against the climate crisis, an aspect that will be at the heart of negotiations at COP26, which began on Sunday, October 31, in Glasgow, Scotland.

From the start of the International Climate Conference, Vanessa Nakate and Greta Thunberg issued an open letter to the media, highlighting three fundamental aspects of the climate crisis that are often downplayed: First, time is running out. Second, we must do justice to the populations most affected by climate change, then finally the case of the biggest polluters who often hide behind incomplete statistics on their real emissions.

Drought in Madagascar, fires in Algeria, locust invasions in East Africa, climatic events are increasing on the continent, which, according to the UN, is responsible for only 3% of global carbon dioxide emissions.

The young activist argues that the populations least responsible for the increase in emissions are facing the worst of the climate crisis. An observation that she systematically presents in her speeches and in the media.

>> COP26: these young French people at the heart of the negotiations in Glasgow

“When you go to northern Uganda, people cry because of the long periods of drought, when you go to the east of the country, people cry because of landslides and floods, and when you go in the west, people are crying because of the floods. So I decided to make my voice heard to stop these injustices which affect populations and threaten their access to food and water in my country “, summarized in France 24, last July, the young woman, who presents herself as an activist for “environmental justice”.

Vanessa Nakate’s argument aligns with the UN’s fear-mongering predictions. “By 2030, it is estimated that up to 118 million extremely poor people (that is, living on less than $ 1.90 a day) will be at risk of drought, flooding and extreme heat. in Africa if adequate measures are not taken “, warned, in a report published on October 19, Josefa Leonel Correia Sacko, commissioner for rural economy and agriculture of the Commission of the African Union.

It was in 2018, when deadly floods hit East Africa hard, that Vanessa Nakate decided to get involved in the fight against climate change. Previously, this 24-year-old student from the capital Kampala was a complete stranger. By discovering Greta Thunberg and her school strikes every Friday, she decides to launch hers in Uganda, in particular by demonstrating in front of the Parliament. But she often finds herself alone, strikes and demonstrations are prohibited in her country.

Hi. I am Vanessa Nakate from Uganda. I am a climate and environmental activist.

This was my first Climate Strike in front of the Parliament of Uganda.

I would like to see how many people this picture can reach in the world.❤️ pic.twitter.com/IQGEyWnjIN


By relaying photos of these strikes, she draws attention on social networks. She was joined by other activists and founded Rise Up Mouvement, an organization that unites African environmental defenders. With this movement, the young woman, now a graduate in business management, launched the “Vash Green Schools” project in Uganda to install solar panels and ecological stoves in rural schools.

Vanessa Nakate’s fight encourages her to cross the borders of her country, at the Youth Climate Summit in New York, at the COP25 in Madrid or at the beginning of October, during a summit organized by the UN in Milan bringing together young climate activists.

Determined to fight against fossil fuels, Vanessa Nakate also takes up the issue of preserving biodiversity, which, in public debate, often takes second place in the face of climate issues. The African continent, where populations live for the most part thanks to agriculture, is home to threatened ecosystems: glaciers, lakes, forests and many endangered species.

In a column, published Thursday in the American newspaper Time, Vanessa Nakate sounded the alarm about the destruction of the second largest rainforest on the planet after the Amazon: the forests of the Congo Basin. “The more I found out about what the Congo Basin was going through, the more worried and angry I became. Why was I not aware of this? One of the reasons is that the world’s financial resources, including the media , are concentrated in the north of the planet, “she said, denouncing insufficient coverage in the media of climatic events affecting countries in the South.

I believe that we need to speak out – to break the silence. I see my task as drawing attention to communities that people may not have heard of, where lives are being upended and lost on a daily basis. I’m on the cover of @TIME Magazine #UprootTheSystem pic.twitter.com/y92PGkHyLX


More money for the climate in southern countries

Financial solidarity with developing countries is, moreover, one of the challenges of COP26. According to the latest report of the Intergovernmental Panel on Climate (IPCC), Africa is on the front line: the continent is warming faster than the world average and must expect torrential rains, droughts and floods . Climate experts are therefore calling on African nations to prepare for the effects of climate change, a notion better known as “adaptation to climate change”.

>> COP26: climate and finance, how to solve the equation?

For Vanessa Nakate, helping developing countries meet their Paris Agreement goals and adapt to the devastating impacts of climate change is not enough. She wants rich countries to mobilize money to compensate for the prejudices suffered, a demand widely shared within the countries of the South. “The losses and damages are already there. The leaders must recognize this and start paying for these losses and damages,” she told AFP in early October.

But rich countries are still a long way from the promises made in 2009 at the Copenhagen Climate Conference. They had, in fact, pledged to increase aid to Southern countries for the fight against climate change to 100 billion dollars per year by 2020. Ten years later, aid reached 79.6 billion, according to the latest figures released in September by the OECD.

1 thought on “Vanessa Nakate, environmental activist and voice of Africa”