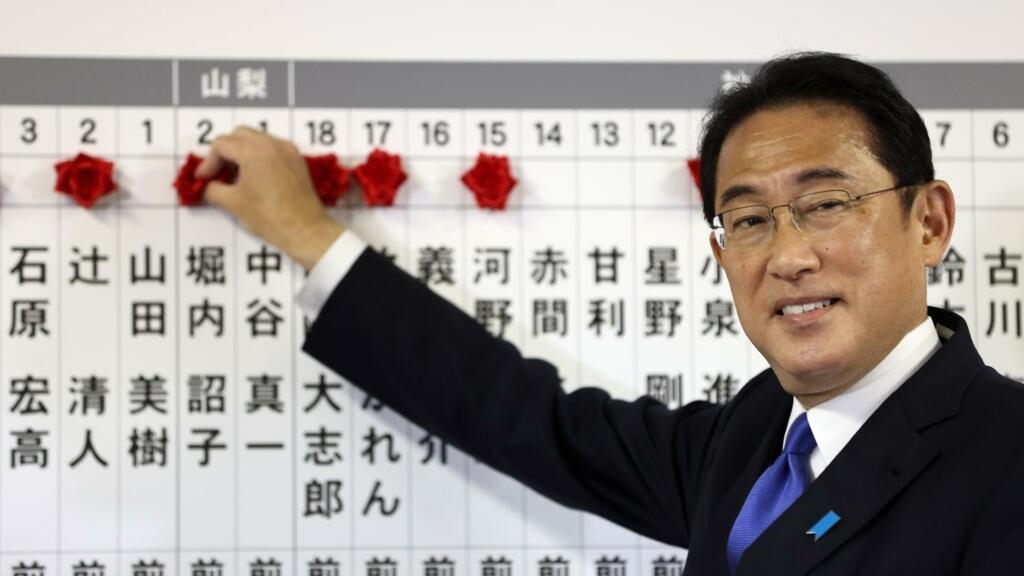 Prime Minister Fumio Kishida’s ruling coalition in Japan, whose image has been tarnished by its mismanagement of the health crisis, is expected to retain its absolute majority in legislative elections on Sunday. But, according to initial estimates from local media, at the cost of several dozen seats in Parliament.

In Japan, the Prime Minister, Fumio Kishida, is in the process of staying in power despite the sharp decline in his formation, the Liberal Democratic Party (PLD) during the legislative elections on Sunday, October 31. The ruling coalition is expected to retain its parliamentary majority, while suffering a notable loss of seats, according to local media estimates after the polls closed.

“I believe that we have obtained a very precious trust” from the voters, Fumio Kishida told reporters on Sunday evening, trying to put on a good face.

The ballot was a test of confidence for Fumio Kishida, who had called these elections a few days after taking office earlier this month, replacing Yoshihide Suga who had himself succeeded Shinzo Abe in September 2020.

While it had 305 seats out of 465 in the Lower House of Representatives at the end of the last legislature, the coalition formed by the Liberal Democratic Party of Fumio Kishida (PLD, conservative right) and the Komeito party (center-right) ) is expected to win at least 261 seats, according to public broadcaster NHK.

Even if Fumio Kishida has thus achieved his goal of a minimum absolute majority of 233 seats for the coalition, the outcome of the election, if confirmed, would be a serious warning.

Still according to the NHK, the PLD alone would have collected at least 234 seats, whereas it previously held 276. This is the weakest performance for the party since its shattering defeat in the legislative elections of 2009. Since its return to the helm in 2012, the PLD had always controlled at least 60% of the lower house of Parliament on its own.

In an unprecedented manner, five opposition parties, the main one of which, the Constitutional Democratic Party (PDC, center-left), had joined forces in many constituencies for these elections.

But much more than this alliance, it is a populist party from Osaka (west), the Japanese Innovation Party (Nippon Ishin no kai), which would have made a spectacular leap, obtaining at least thirty seats, three times more than in 2017.

This decline in the ballot box of the main ruling party should make it more dependent on the Buddhist Komeito party, hostile to the restart of nuclear power plants shut down following the Fukushima accident in 2011, and traditionally more benevolent towards China than the conservatives.

“The decline of the government coalition could make Parliament more difficult to lead,” said Airo Hino, professor of political science at Waseda University in Tokyo.

No state of grace

The situation has indeed changed a lot since the previous legislative elections in 2017. Shinzo Abe, who seemed stainless in the post of Prime Minister since 2012, resigned in September 2020 for health reasons.

His successor Yoshihide Suga only lasted a year, victim of record unpopularity due to his clumsy management of the health crisis linked to Covid-19 and his stubbornness in maintaining the Tokyo Olympics last summer, despite the opposition of a majority of Japanese.

Fumio Kishida, 64, who became president of the PLD at the end of September, then appointed Prime Minister by Parliament at the beginning of October, did not enjoy a state of grace.

Not very charismatic, the Japanese Prime Minister did not enjoy a state of grace in public opinion: his popularity hovered around 50% in early October, one of the lowest for a new Japanese leader for twenty years. Which questioned its ability to last in power, and even more after the mixed electoral victory of the PLD.

Covid-19 and the economy

These elections should cause a stir within the PLD over Fumio Kishida. This former banker is going to have to prove himself economically if he is to win the election next year.

The pandemic and the economy, whose recovery remains sluggish in Japan, were the main themes of the electoral campaign which lasted only 17 days.

The dissatisfaction of some voters with the PLD was palpable in the polling stations. Measures against the coronavirus since 2020 have been “messy,” Takashi Shima, 51, told AFP. Chihiro Sato, a 38-year-old mother, mainly thought about the difficulties: “The economy is suffering because of the coronavirus,” she noted after voting on Sunday morning in Tokyo.

While having made the fight against Covid-19 his number one priority, Fumio Kishida also promised a massive new fiscal stimulus plan very quickly and said he wanted to fight growing social inequalities in Japan since the pandemic, but his plan to “new capitalism” remains very vague for the moment.

He also pleads for the revival of civilian nuclear power in Japan, the use of which has been very limited since the Fukushima disaster in 2011 and which remains a sensitive subject in public opinion.

On Sunday evening, Fumio Kishida reiterated that he would implement what he promised: “I think this will lead to greater and wider support from the population”.

The number of coronavirus infections has fallen recently in Japan, after reaching record highs in August. In addition, after a difficult start, vaccination has accelerated in the country: more than 71% of the inhabitants have now received two injections.

1 thought on “Legislative in Japan: the ruling coalition saves its majority despite a sanction at the ballot box”