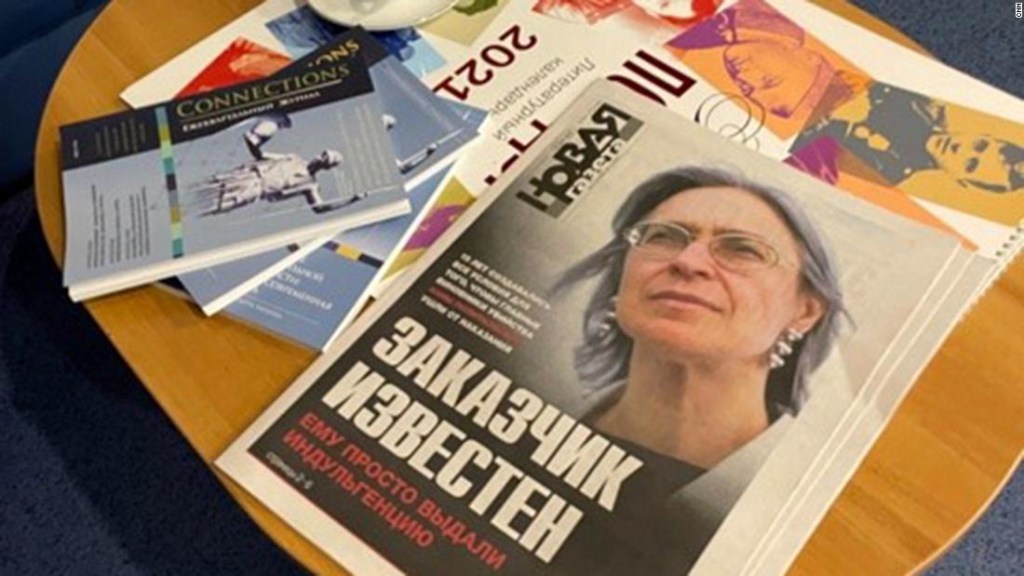 López Obrador will be one of the great absentees in the G20 2:50

(CNN) – Friday is the cruellest day for the Russian opposition. In small overheated apartments, cafeterias and newsrooms, journalists hover over their screens, waiting to see if the homeland has painted them with a stigma close to that of “traitor.”

What comes up most Fridays, in the website of the Ministry of Justice of Russia, is the most recent list of media and individuals designated as “foreign agents“.

Freelance journalists see this as indelible smear. Russian President Vladimir Putin insists that he does not intend to silence or censor, but simply to inform readers and viewers that some of the media they consume have foreign funding.

“This law does not prohibit anyone from having their own opinion on an issue. It is about receiving financial aid from abroad during domestic political activities,” Putin said recently.

For Nobel Peace Prize winner Dmitry Muratov, this is the Kremlin’s latest move in the campaign to end independent journalism and all that remains of Russia’s effective opposition.

“While in the 1990s and early 2000s journalists were killed by hitmen, as happened with our journalist Anna PolitkovskayaFor example, it is now a soft throttle policy that happens with the help of the foreign agent law, “he told CNN.

As editor-in-chief of Novaya Gazeta, he lost six colleagues from the newspaper in the fight for the truth. The most famous of them was Politkovskaya. Born in the United States but fiercely committed to Russia, she was shot and killed at the entrance to her Moscow apartment 15 years ago.

The former Politkovskaya office in the newspaper building is part museum, part research center. Documents and photographs cover an entire wall, accusations and suspects are intertwined with black thread.

“When a media outlet is declared ‘undesirable’ it has to declare itself a public enemy, which means that it effectively stops operating,” says the bearded boss, who has already given the Nobel prize money to children’s charities and journalistic causes.

Vladimir Putin has ruled Russia, as president, then prime minister, now president again, since New Year’s Eve 1999. During those 22 years, journalists and opposition politicians have been assassinated and their killers are rarely, if ever, identified.

“Being an opposition politician, freelance journalist or blogger is clearly a risky business in Russia. More than a dozen have been killed or died under suspicious circumstances. Many others have suffered violent attacks. Few of these crimes see an effective investigation. which perpetuates a climate of impunity, “Tanya Lokshina, Moscow-based Human Rights Watch associate director for Europe and Central Asia, told CNN.

Whoever ordered Politkovskaya’s assassination is still at large.

Five Chechen men were convicted, in 2017, of the assassination of opposition leader Boris Nemtsov outside the Kremlin two years earlier. But no one has identified who offered them a reward of 15 million rubles. The court said they were promised that amount for the murder.

Politicians such as Alexey Navalny have been jailed for what they say are fabricated charges. And Navalny continues to suffer from the effects of Novichok poisoning, a nerve agent known to have only been produced by the Russian state.

Independent journalists do not believe that the physical dangers to them have disappeared. Several have fled into exile. Being appointed as a foreign agent possibly increases the dangers you face.

Especially since Putin is still popular with the majority of Russians.

“Putin is based on the love and loyalty of more than 70% of Russians. And he is the president of the majority. And when it comes to the interests of the minority, he is not their president. And it is their newspapers that are the ones. they are labeled as foreign agents, their opposition is crushed, their leaders are imprisoned, “says Muratov.

The recent enforcement of the 2017 media law, which at last count has designated 88 outlets and individuals as “foreign agents,” has been a blow to the solar plexus of journalists who view their work as a patriotic duty.

The Dozhd TV (TV Rain) studios vibrate with the same hipster energy that fills the renovated warehouses teeming with galleries and designer stores all around them. But it’s an anxious buzz. In August, the media company found itself in the list of new “foreign agents”.

A government-mandated red warning fills the screen before each new segment of each program. It is also mandatory in all featured tweets on the channel’s website.

Anna Politkovskaya was shot dead at the entrance to her Moscow apartment 15 years ago.

In Stalin’s days, which are largely in the living memory of Russia, such a designation would have led to a speedy trial and, for the lucky few, a bullet to the neck. The unfortunate would have been sent to a slow death among millions of other victims of the Soviet purges.

“When they appoint you as a foreign agent, they basically call you an enemy of the state; because if you work for another state, then you are working against your own state, which is not true, of course. But in Russia with its own terrible history, it means a lot. It means that it is not safe to work with you, “explains Tikhon Dzyadko, editor-in-chief of TV Rain.

“If you don’t mark any of your materials [con la advertencia roja], even the photo of cute New Zealand puppies, if you forget to use these 24 words that say this material was ‘created by a foreign agent’, you could be fined 300,000 rubles, the second time 1 million rubles, the third time , I suppose, with 5 million rubles. And then if we don’t pay, there could be a criminal case against me and the owner of TV Rain, “he explains.

So far, he says, advertising revenue has been largely unaffected and that it is a small fraction of the company’s revenue. But the business implications are obvious, and he says he has a hard time understanding why someone advertising cars would want their publicity alongside a government indictment that is unpatriotic at best.

Other sites, he noted, had seen their revenue drop by 90%.

There is a Kafkaesque element in Russia’s latest apparent attempts to silence the opposition with the label of “foreign agent.” Putin’s argument – that it is not censorship, just an accurate picture of where the funding is coming from – is not reflected in the designations of the government news agency Tass, or Interfax, Russia’s dominant news service.

Technically, any news organization that receives funding, however insignificant, from outside the country can be designated as a “foreign agent.” But that’s not true for pro-Kremlin teams.

Both Tass and Interfax – according to Federal Supervisory Service in the Sphere of Communications, Information Technology and Media of Russia– they receive foreign funds but have avoided being designated as “foreign agents”.

In fact, so is the financial group that owns RT, formerly Russia Today. In January 2017, US intelligence agencies charged the television network of being part of the “Russian state propaganda machine”.

Putin has repeatedly said that the Russian designations, which coincidentally followed RT’s own endeavors in Washington in 2017, simply reflect American law. However, there is no American journalist fleeing his own government.

Roman Dobrokhotov is hiding in Europe. He is editor-in-chief of the newly appointed “foreign agent” The Insider, an investigative news site that receives some funding from outside Russia.

He did not reveal his location to CNN. His wife, children, and family in general have followed him.

In Russia he is accused of defaming a Dutch blogger widely in favor of Putin. It is an accusation that Dobrokhotov vehemently denies. But repeated police raids on his own home and his parents’ residence mean he feared something worse would follow.

The latest round of what he calls state intimidation came after he worked with foreign media and his own site on an investigation into Navalny’s poisoning with the nerve agent Novichok in Russia.

“Everyone understands that this is the most difficult time for Russian journalism since the Soviet Union, even since the Stalin era,” he says.

The Nobel Prize to Muratov and Maria Ressa, a Filipino journalist who, like him, has fought hard for press freedom, may offer him some protection … for now.

Nobel laureate Muratov, who says the newspaper does not receive any funding from outside Russia, sighs: “If they want to declare us foreign agents, they will. There is no way we can protect ourselves against that. This decision is made out of court and without trial.” .

HRW: Cuba puts a new brake on freedom of expression 3:26