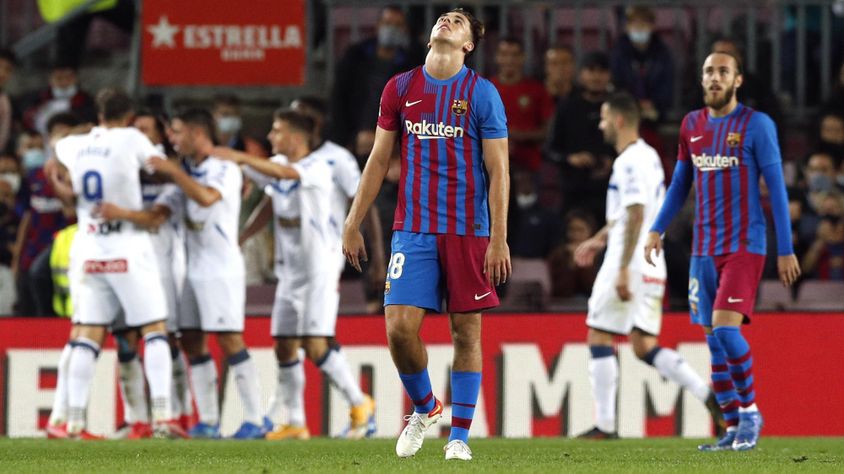 Even the new temporary “coaching broom” did not free FC Barcelona footballers from the misery. The Catalan team, whose head coach Ronald Koeman finished 0: 1 with Ray Vallecano on Wednesday, has already led Sergi Barjuan in the 12th round of the La Liga against Alaves.

Memphis Depay opened the scoring in the 49th minute, but three minutes later the visiting Luis Rioja equalized and the “Blaugranas” did not win in the third league duel in a row. In the incomplete table, they figure only in the ninth place with an eight-point loss in the first place.

“I didn’t have much time to prepare the team. I mainly tried to keep our game balanced in the offensive and defensive. It wasn’t looked bad, but the result is disappointing.” admitted Barjuan, who wore the Barcelona jersey in 1993-2002 during his playing career. The management of “Barcy” quickly called him from the B-team to temporarily replace the position of head coach after the dismissal of Koeman, for whom he is intensively looking for a replacement.

Sergio Agüero will not remember Saturday’s duel at Camp Nou. FC Barcelona striker had to take turns in the first half, complaining of chest pain. The thirty-three-year-old player was treated directly on the surface for several minutes. Then he managed to get off the field on his own and traveled to the hospital for an examination, where they kept him.

Sergio Agüero did not finish Barcelona’s match against Alaves, he had to be hospitalized

According to Barjuan, it is important that the team “catches” as soon as possible. “We have to return to the winning path. At the moment we are not achieving the results expected by the club management and the fans. However, the league is a long competition, we need to raise our heads quickly and try to gain three points in Vigo on Saturday.” added Barjuan. Before that, Barcelona will compete in Dynamo Kiev in an important Champions League match in which it needs to win.

While Barcelona is also looking for a result in the game room, the opponents from the upper floors of the table of the highest Spanish competition miss it. The main rival Real Madrid did not hesitate on the Elche field and after a 2: 1 victory he got to the first place by the score before FC Sevilla and Real Sociedad.

Vinicius Junior took care of both goals of the winners. The home crowd breathed a collective sigh of relief when Luka Modrič was unable to put the ball in the net after his show of skill down the left 73 minutes into the match. The home team played in a weakening, but still managed to reduce thanks to the individual action of the alternating Pere Mill.

Real managed to satisfy the fans after the previous home goalless draw with Osasuna. “We chose a practical tactic that worked. The players had practically only two days to regenerate, so we decided it wouldn’t be wise to play an open game with Elche. The program is inflated, players would lack intensity and energy. We had to think about it and adapt under these circumstances, the style of play and the line-up, which was a few changes compared to Wednesday’s match, “ declared Ancelotti, who was again pleased with Vinicius Junior.

At the beginning of the season, the young Brazilian waited a long time for his chance, and when she arrived, he took it as it should. He became the team’s goal “machine”. He already has 7 goals in his account, which he scored in 11 La League matches. “I’m no magician, he just has my trust and he pays her off with goals on the lawn. That’s all. I’m really happy for him because he’s a player with a great future.” Ancelotti thinks.

1 thought on “The Barcelona crisis continues without Koeman. Temporary coach Barjuan did not bring a recipe for success – ŠPORT.sk”