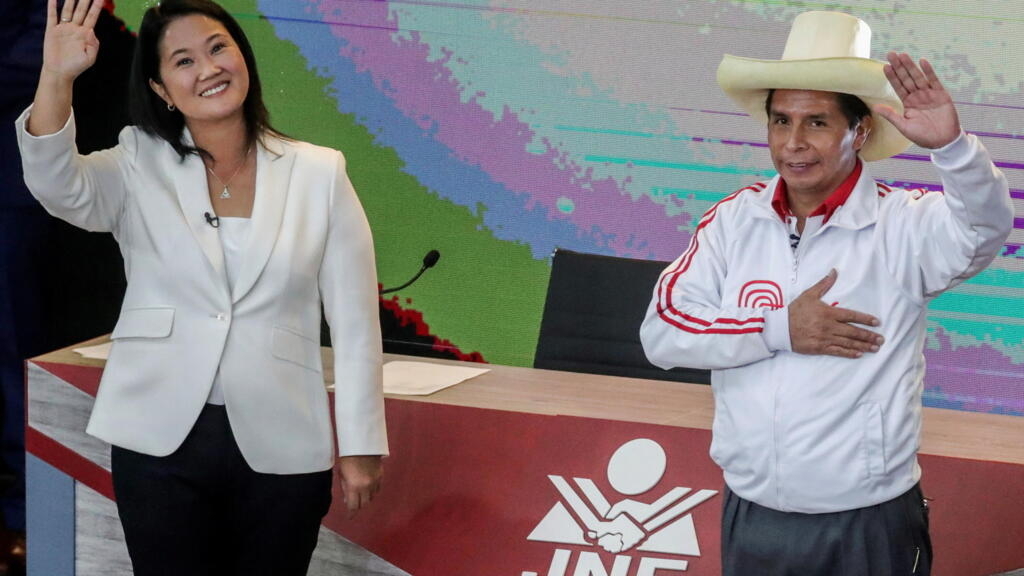 Newbie in politics Pedro Castillo, a teacher representing the radical left, and the experienced candidate of the populist right, Keiko Fujimori, face each other on Sunday for the second round of the presidential election in Peru.

Peru torn between two extremes. On Sunday June 6, political novice Pedro Castillo, a teacher representing the radical left, will face the experienced candidate of the populist right, Keiko Fujimori, in the second round of the presidential election of the South American country.

Pedro Castillo, a 51-year-old schoolteacher released from anonymity in 2017 thanks to a large strike movement of teachers of which he had taken the lead, had created the surprise by taking the lead in the first round on April 11.

Born in Puña, in the province of Cajmarca (north) where he wears the traditional white hat, this married man and father of two children lived and worked as a teacher in a rural school for 24 years.

He likes to differentiate himself from his rival by emphasizing his provincial roots and often dons a poncho and puts on shoes made from tractor tires. He also often arrives at his country appointments on horseback.

His program is based on strengthening the sectors of health, education and agriculture with the aim, he said, to improve the plight of the poorest Peruvians facing a recession aggravated by the pandemic, as well as ‘to an increase in unemployment and poverty.

Pedro Castillo is also in favor of regaining state control of the country’s energy and mineral wealth.

He pledged public investments to revive the economy through infrastructure projects and public procurement with small businesses, and intends to “curb imports that affect national industry and the peasantry”.

He also announced that he would convene a Constituent Assembly to draft a new Constitution which he accuses of too much favoring the market economy.

Among his most controversial campaign pledges, Pedro Castillo pledged to deport foreigners who commit crimes in Peru, a thinly veiled warning to illegal Venezuelan migrants who have arrived in the hundreds of thousands since 2017.

He also wants to reintroduce the death penalty.

Frequently citing the Bible to make his case, he said he would “not legalize abortion, nor worse yet, same-sex marriage.”

If elected, he will give up his presidential salary and continue to live on his national education salary.

The heiress of Fujimorism, that mixture of authoritarian populism, societal conservatism and economic liberalism, has spent half of his life in politics. In 1994, at the age of 19, her parents’ separation had forced her to become a sort of surrogate First Lady.

>> To see: Fujimori, the Japanese dynasty which is tearing itself apart in Peru

But she is not the only one to have tasted politics in this family from Japan. In 2017, she broke up with her younger brother Kenji, 40, who was vying for the leadership of the movement, before he gave up politics.

This mother of two children, married to an American, still benefits in part of the country from the popularity of her father, whom many Peruvians admit to having overcome the far left guerrillas of the Shining Path (1980-2000) and the hyperinflation bequeathed by its predecessor.

Her 82-year-old father has been serving a 25-year prison sentence since 2007 for corruption and crimes against humanity. Keiko Fujimori reiterated his intention to grant him a presidential pardon.

But the name Fujimori, present for more than 20 years in Peruvian politics, could put off many voters.

Especially since the leader of Fuerza popular (right-wing populist) herself spent 16 months in preventive detention in an investigation for corruption. The prosecution requested 30 years in prison against him in connection with the investigation into the Odebrecht scandal, named after a Brazilian construction giant who admitted to paying bribes to dozens of Latin politicians – Americans.

If she wins the presidential election, she would escape prosecution for a while and could only be tried at the end of her five-year term.