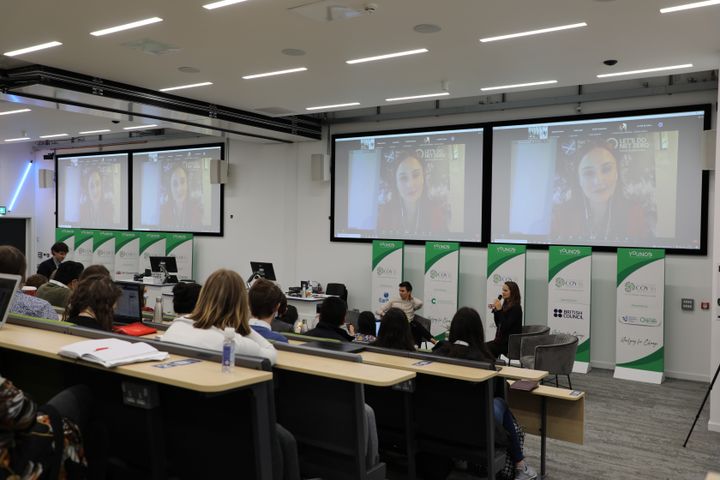 Julieta Marino, 24, grew up in Misiones, Argentina, “near the rainforest”. “During my life, I have seen the landscape change, I have seen my environment being devastated”, she says. Amalen Sathanantar, 28, is Malaysian. “My family’s house in Kuantan is by the beach. I will never be able to inherit it because of the rising waters.”, he regrets. Usually separated by the Pacific, these two young activists met in Glasgow (United Kingdom). They participate, until Sunday, October 31, in the 16th United Nations Youth Climate Conference (COY), organized ahead of COP26.

“Seeing this damage pushed me to get involved, more and more”, explains Julieta Marino to franceinfo. For the past year, she has participated in the organization of the event. This Friday, she is walking at full speed through the wide, white hallways of the University of Strathclyde Architecture Building, which houses the conference. It is often interrupted in its course by a reunion with another member of the conference or directions to give to a lost participant.

Head to the large amphitheater 325 for a videoconference with the Scottish Minister for the Environment, Mairi McAllan, whose face is projected on giant screens. Distancing measures oblige, one in two seats is empty. But despite the limits imposed by the Covid-19, the young people present, like those who attend the event remotely, have no shortage of questions. “How to do when our governments do not follow us?” a young Mexican throws him in the assembly. “I’m sorry you felt this”, replies the minister.

This remark on the inaction of the leaders is echoed in the aisles of the conference, borrowed by the hundred volunteers and the approximately 200 national delegates of the COY. High school students, students or young workers … They are not more than 30 years old, but assert themselves: “We’re not kids who just scream loudly. We’re educated, we follow science. Even though we don’t have their years of experience, we have that sense of urgency that they don’t.”, defends Julieta Marino, student in international relations.

“We are seeing the reality in the face, which is why we are desperately waiting for real action.”

“We ask the leaders to give us a future”, outbid 26-year-old Londoner Xan Northcott. To make his voice heard at COP26, he attended a workshop on lobbying in another room. The atmosphere is studious, like a tutorial class. Participants work in small groups under the guidance of volunteers from Youngo, the youth arm of the United Nations Framework Convention on Climate Change (UNFCCC), which is organizing the event. 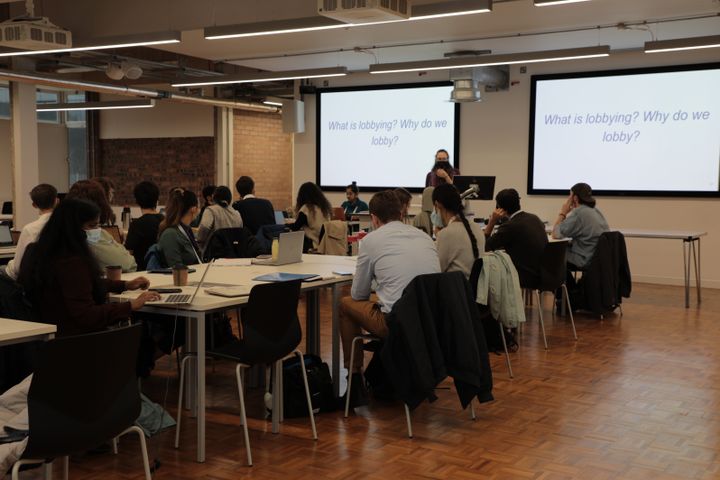 “What is the lobby and why do we use it?” Ask COY participants in Glasgow (Scotland) on October 29, 2021. (CAMILLE ADAOUST / FRANCEINFO)

Later, the same will meet in room 423 to listen to a conference on how “youth participation in politics can help fight climate change”. For Manon Frezouls, a 26-year-old Frenchwoman, the answer is in a few words: “The determination we see here is because we understand that we no longer have a choice. The difference [avec la COP]is that young people no longer take action as an option. ” If her job at Unesco also touches on the link between youth and the environment, she wanted to “do more” by participating in the COY.

Convinced that they have a role to play in the negotiations that will take place between States a few kilometers away, these young people have come together to agree on a “world youth declaration”. The document, the main objective of this conference, includes the demands of young people from all over the world. “We wanted to be as inclusive as possible, because not everyone can come here. We therefore collected the voices of young people from 140 countries on the ground upstream”, through universities and other voluntary structures, exposes Manon Frezouls, who participated in this harvest. “Transport, waste … All requests converge towards the same objective: quickly find solutions to counter the climate crisis and stay below the 1.5 ° C of the Paris agreement”, continues Hélène, delegate for France.

The document was personally delivered to Alok Sharma, President of COP26, before being presented on November 5 by Youngo to delegations around the world, during a day dedicated to youth at the COP. Will their demands be heard there? Amalen Sathanantar has doubts. “They give us a space to express ourselves, but at the end of the day, it’s just window dressing. What comes out of our discussions? It’s still pretty fuzzy.”, sighs this student who is in his fifth COY and thinks to himself “disillusioned”. This year, the rendering of the declaration will have the advantage of being supported by a youth protest in Glasgow. The host country promises them, through its Minister of the Environment: “We are all behind you!”

1 thought on “REPORTING. Before COP26, youth hold their own climate conference in Glasgow and summon the leaders of – franceinfo”