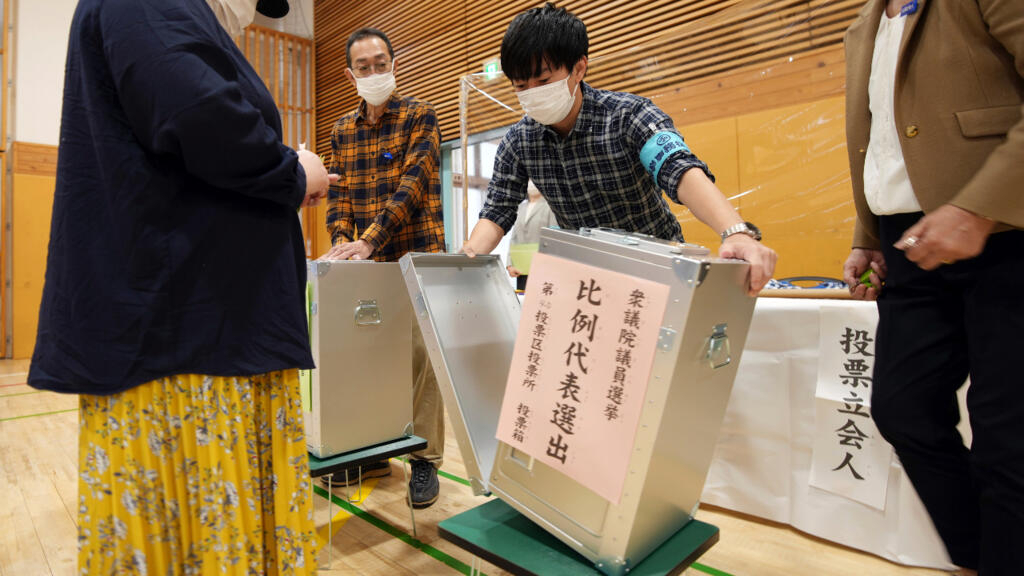 The Japanese go to the polls on Sunday, October 31 for the legislative elections. And if the Liberal Democratic Party of the new Prime Minister, Fumio Kishida, should win the ballot, it could see its lead over the opposition diminish.

Polling stations opened in Japan on Sunday, October 31, for the legislative elections. Some 106 million voters are called upon to decide between 1,051 candidates for 465 seats in the lower house of the Diet. If the new prime minister, Fumio Kishida, hopes to keep his post, his party, the Liberal Democratic Party, could give way to the opposition.

The pandemic and the economy were the dominant themes of a brief election campaign that lasted only seventeen days. In the polling stations, the dissatisfaction of some voters was palpable on Sunday.

“I focused on the measurements [des partis] against the virus, and I also wanted to speak about the arbitrary way in which the government makes its decisions, “Teruyo Kaneko, a 76-year-old Tokyo woman, told AFP as she left her polling station.

Chihiro Sato, a 38-year-old mother, had above all the economic difficulties in mind: “The economy is suffering because of the Covid-19, so I compared the programs” of the candidates on this point, did -she explains.

In the last legislature, the Liberal Democratic Party (PLD, nationalist right), which has dominated Japanese politics almost without interruption for 66 years, held 276 seats and its ally, the Komeito party (center-right), 29. That is to say 305 seats in total, which gave them a very large control of power.

But the situation has changed a lot compared to the last legislative elections in 2017. Shinzo Abe, who seemed stainless as Prime Minister, resigned in September 2020 for health reasons. His successor Yoshihide Suga lasted only one year, victim of unpopularity records due to his management considered clumsy to the health crisis and his desire to maintain the Tokyo Olympics at all costs.

Elected president of the PLD at the end of September thanks to the support of the party’s caciques, then appointed Prime Minister by the Parliament at the beginning of October, Fumio Kishida, 64, does not however enjoy great popularity in public opinion. It hovered around 50% in early October, one of the lowest for a new Japanese leader in twenty years.

Fumio Kishida is aiming for the shortest absolute majority in the legislative elections: 233 seats for the PLD and Komeito together. A way to save face even in the event of a significant loss of seats.

“If their number of seats fell to this level, it would be very difficult for the reputation of Fumio Kishida,” warns Michael Cucek, professor of Asian studies at the Japanese campus of Temple University, interviewed by AFP.

“When a Prime Minister is in this position only thanks to others, from the moment he begins to lose altitude, he begins to move towards a deadly plunge,” adds Michael Cucek.

“We must show the public that the PLD is resuscitated,” said Fumio Kishida after his election as head of the party. He promised to make the fight against Covid his priority, but also to revitalize the economy and reduce growing social inequalities.

The PLD has long benefited from a historically weak and fragmented opposition. But for these legislative elections, five opposition parties are cooperating in many constituencies, an unprecedented alliance that could weaken their crushing rival.

On the other hand, the PLD has large resources and remains a master in the art of controlling the electoral process, especially in rural areas where it cultivates very old links with voters.

Another asset for Fumio Kishida and his party: the number of Covid-19 infections fell recently in Japan, after reaching records in August. And after a difficult start in early 2021, vaccination has accelerated in the archipelago where more than 71% of the inhabitants have now received two injections.

Voter turnout, particularly low in Japan (53.68% in the 2017 legislative elections and 52.66% in 2014), will be closely scrutinized on Sunday. A high abstention traditionally favors the PLD.

1 thought on “Legislative in Japan: the ruling party, favorite, could give ground”