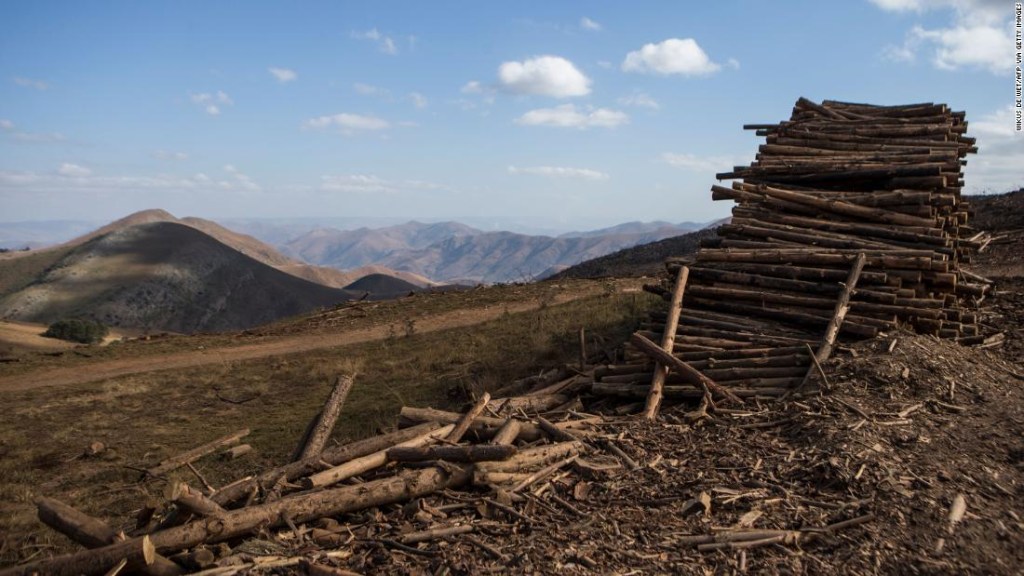 (CNN) – Human activity and catastrophes caused by climate change have turned 10 internationally recognized forests on the planet, also known as World Heritage sites, from absorbing carbon to emitting it, the researchers found.
The Unesco report notes that these places can absorb approximately 190 million tonnes of carbon dioxide from the atmosphere each year, about half of the UK’s annual fossil fuel emissions.

But in the last 20 years, many of these sites showed an increase in emissions, some even exceeding the amount of carbon they removed from the atmosphere.

According to Unesco researchers, there are two main factors that are causing forests to change from being sinks to sources of carbon: extreme weather events caused by climate change, such as forest fires, storms and droughts, and human pressures on land use, such as illegal logging, logging, and agricultural practices such as grazing.

Logs stacked amid deforestation in the Makhonjwa Mountains, near Barberton, Mpumalanga, in 2018.

Given the scale of these forests, Tales Carvalho Resende, project officer in UNESCO’s natural heritage unit and co-author of the report, says this is increasingly a global problem, meaning global action is needed.

“What the results reveal here is that it is not necessarily a problem related to a specific country or region, but it is really a global problem,” Resende told CNN. “When we see where the 10 places that have become carbon sources are, they are scattered around the world, so the conclusion of the results is that climate action is needed at a global level.”

A woman sits near Yavapai Point, on the South Rim cliff, overlooking the Grand Canyon, one of the three World Heritage sites in the United States that, according to Unesco, has become a source of carbon emissions.

From the Congo Basin to the whole of Redwood National and State Parks, the planet’s 257 World Heritage forests cover almost 700,000 square kilometers of land, almost twice the size of Germany.

But the report shows that, since 2000, threats from extractive industries, environmental degradation and climate change have been recorded in about 60% of World Heritage sites, which have lost more than 348,600 hectares. of forests, an area greater than that of Belgium. Of the 10 sites that have become carbon emitters, three are in the United States.

The report’s findings are a timely warning about the limitations of trees and forests as a climate solution. Leaders and negotiators will meet in Glasgow, Scotland from Sunday to discuss ways to limit global warming, and tree planting is one of the top four priorities identified by the UK government, which is chairing the event.

Protecting forests and planting trees have enormous potential to absorb carbon from the atmosphere, but in a wildly rapidly changing world, trees in wildfire-prone areas could become part of the world. problem, rather than the solution, as these Unesco sites show.

Two people walk through a fire-ravaged area in the Great Blue Mountains World Heritage Area near the town of Blackheath, Australia, on February 21, 2020. Credit: Brook Mitchell

“We can now see the important role that World Heritage forests play in stabilizing the global climate,” Nancy Harris, research director of the World Forestry Observatory at the World Resources Institute and co-author of the report, told CNN. “And the truth is that we are totally underestimating and belittling them.”

Most of the places that sequester the most carbon dioxide are in tropical and temperate regions, such as South America and Australia. Although those places they continue to sequester carbon, the researchers said there are indications that more of them could become carbon sources.

Wildfires, in particular, have burned vast swaths of these forests in recent years. Although fires are a critical part of the forest ecosystem, as many plant species depend on them to disperse their seeds, scientists say they are intensifying, risking the release of carbon stored for a long time in the soil and the trees.

A view of Half Dome from Glacier Point in Yosemite National Park. According to UNESCO, this World Heritage site has become a source, rather than a sink, of carbon emissions.

In the last decade, rising temperatures and dry conditions have prepared much of the environment for forest fires to occur. The report points to several examples of major fires that have occurred in the past decade at World Heritage sites, including Lake Baikal in Russia in 2016, and in the Tasmanian Wilderness and Great Blue Mountains in Australia. in 2019 and 2020.

“We have seen some forest fires in some places that have emitted more than 30 million tons of CO2, which is roughly equivalent to Bolivia’s emissions from fossil fuels in a single year,” Resende said.

“A single event can really match the emissions of an entire country,” he added. “And you have to keep in mind that the emissions that have been accounted for in the study are only within the limits of the sites, so this means that they represent only a small part of the fires in the larger picture.”

The report is based on recently published maps that track global carbon exchange between forests and the atmosphere over the period 2001-2020, using site-level monitoring to analyze the climate impacts of forests, as well as consequences. of human activities at these World Heritage sites.

“Our analysis illustrates how we can stop taking nature for granted and begin to value the climate benefits generated by these and other important forested places around the world,” said Harris.

Forests play a vital role in all societies. According to the International Union for Conservation of Nature, which also contributed to the report, almost 25% of the world’s populationTo a large extent in developing countries, it depends on forests for its livelihood. In addition, forests contribute up to US $ 100 billion a year in goods and services. They are also home to 80% of the Earth’s biodiversity.

The ability of forests to prevent the climate crisis from spiraling out of control makes the threats they face even more concerning, Resende said.

World leaders will meet in Glasgow, Scotland next week for the UN-sponsored international climate negotiations, which will seek to get countries to commit to further reducing fossil fuels and to set a final date for the use of coal. They will also discuss stronger commitments to protect and restore the planet’s forests as carbon sinks and to end deforestation.

“We hope to really unleash climate action, to safeguard these gems that are World Heritage sites,” Resende said. “They are laboratories of environmental changes as a whole, not only related to climate but also to biodiversity. We want to facilitate the dialogue with the main actors to finance and provide some sustainable investments to these sites.”