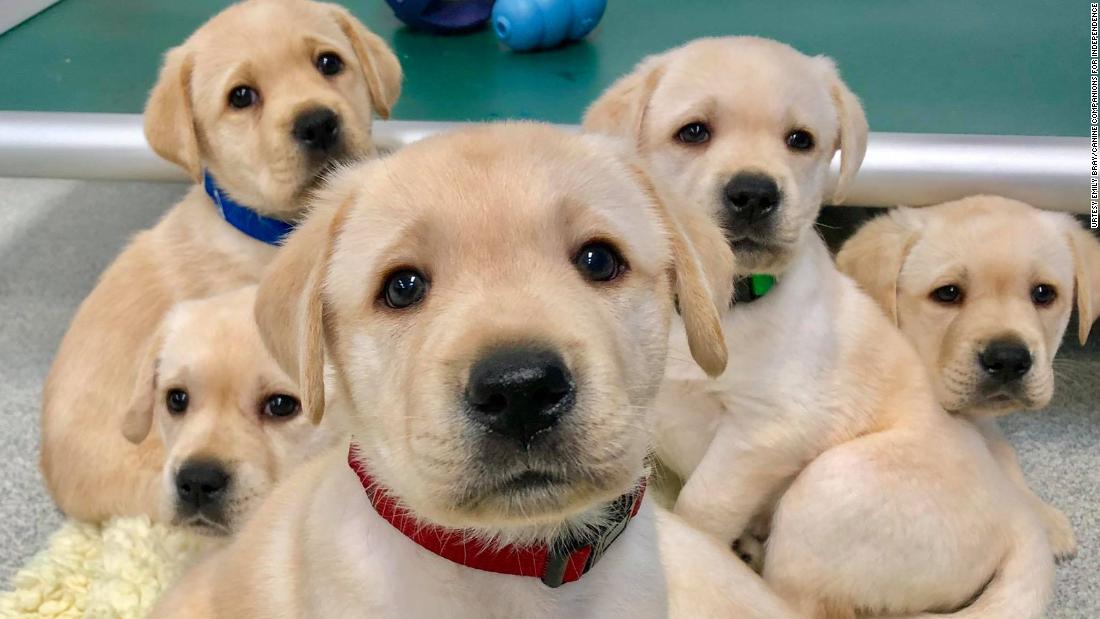 (CNN) – What do you like the most about dog puppies? Is it their cute yawns, their wavy tails, or the sweet way they lick your nose? Or maybe it’s those sad eyes staring into yours like they know what you’re thinking.

Whatever it is, rest assured that puppies are ready to communicate with you shortly after birth, says Emily Bray, a postdoctoral research associate at the Arizona Canine Cognition Center at the University of Arizona School of Anthropology.

“Puppies will look and return a person’s social gaze and successfully use the information provided by that person in a social context from a very young age, all before any extensive experience with people,” Bray said.

Bray has been studying guide dog development for the past decade in collaboration with Canine companions, a non-profit organization that provides dogs free of charge to adults, children, and veterans with physical or cognitive disabilities.

The service dog group is great for research because they often have known pedigrees that go back several generations and are bred and trained very similarly. That gives researchers more options to determine how much of a dog’s behavior is due to genetics compared to environment or training.

In a study published Thursday in the journal Current Biology, Bray and his team tested 375 puppies that were around 8 weeks old on a series of sociocognitive measures that had already been tested in adult dogs.

One task was to make eye contact with the researcher, another was to follow the gesture of the researcher’s hand and eyes towards a treat hidden under one of two cups about 1.3 meters away. The researchers hid the treats equally between the left and right cups.

“We know adult dogs are good at these tasks,” Bray said. “When it starts? Does it take years of observing humans and living with humans, or is that ability something they are more biologically prepared for and one that has evolved through domestication? “

The 375 puppies were Labradors, Golden Retrievers, or a Labrador-Golden mix and still lived with their mother and littermates. None had gone to live with volunteer trainers, where extensive one-on-one human interaction would begin.

Some of the 375 puppies that participated in the research. Most were Labradors, Golden Retrievers, or a Labrador-Golden mix.

The pups were “very adept” at following the person’s cues to point and look at only one of the cups where the treat was hidden, Bray said, and “there was no evidence that their performance required learning to do so.

“Most puppies chose the correct cup 70% of the time,” he said. They’re not perfect, but it’s definitely better than chance. There is something they are picking up on, even at 8 weeks old. “

In fact, many of the puppies were able to follow a person’s gaze or gesture toward a hidden treat from the first test, without training.

An 8 week old puppy follows a human gesture towards a treat under a cup.

More than 40% of the variation in a puppy’s ability to follow the point with a human’s finger or gaze could be explained by the genes they have inherited, Bray said.

“It is an equation that we can calculate because we know the performance in behavior, and we know how related all the puppies are to each other, because we have their pedigrees,” he said. “This is the first direct evidence to show that there is a genetic basis.”

Baby voice is a must

Why did the cubs get involved in the first place? The researchers drew the puppy’s attention with a high-pitched voice, what human mothers would call a “baby voice.”

The studies have found that such intonations are key to boosting a human baby’s speech and language development. Also, babies have an innate preference for that kind of conversation.

It turns out that puppies and dogs do too. Called “speech directed at dogs” in the world of canine research, studies show that dogs are more likely to respond well to high-pitched voices.

And they have trained their human owners well; it is quite common to hear people talking to their dogs in a baby-like cadence: “Who’s a good boy?” You are a good boy? Would you like a gift? »

The environment plays a role later

Not all pups responded the same, Bray said, “Some puppies stare at you with their eyes, others sleep in the corner, like ‘I don’t care.’

But the team followed 160 of the cubs into adulthood and tested them on the same tasks again to see if their puppy behavior predicted how they would act as adults.

“Almost universally in all tasks, performance improved as they got older, especially in things like impulse control and social cues,” he said. “They can do it when they are young, but they can do even better when they are adults.”

One result of the research, Bray said, is that it will give more clues to the traits of a dog that will eventually become a successful service dog, which could make the selection and training process more effective and efficient.

“For example, how willing a puppy is to make and maintain eye contact is a predictor that he will grow up to be a successful service dog,” he said.

Future research will focus on trying to find which genes are linked to which traits, so that process can be further refined, Bray said, along with which genes could be associated with cognitive decline as dogs age.

“There’s a lot of work to do with the dog puppies,” Bray said with a smile. “It’s hard work, but someone has to do it”.

1 thought on “Dog puppies are born ready to interact with people, study finds”