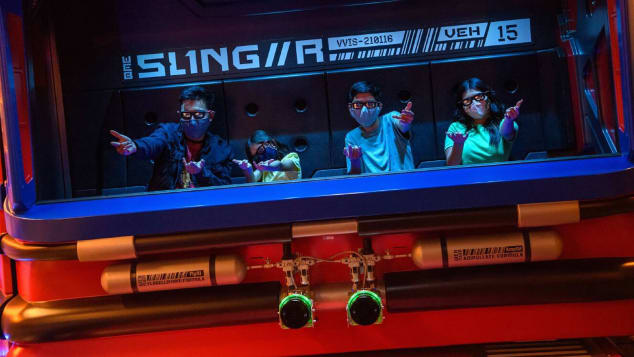 “Avengers Campus”: this will be the new Disney park 0:44

(CNN) – Postponed, but not discouraged, Spider-Man, Black Panther and other superheroes from the Marvel comics universe will debut their new campus this week, days before the state of California lift almost all your covid-19 restrictions.
The Avengers Campus is scheduled to open this Friday at Disney California Adventure Park in Anaheim, almost a year later than expected.

CNN had the opportunity Tuesday to take a look at what it has to offer on a media tour.

A mother-daughter team that claims to have seen every Avengers movie has already bought tickets for next month.

“I mean, who doesn’t love the Avengers?” Vanessa Valdez said on her visit to California Adventure on Tuesday. «They are incredible movies. Amazing.

“She (Vanessa) said ‘Let’s see them all’ and I thought ‘I want to be cool,'” added her mother, Francis Lundmark. “We sat for almost six weeks and watched all the movies, from Captain America to WandaVision.”

Go for a walk with Spider-Man

Visitors to the park can throw their own webs in the new interactive Spider-Man Adventure mission. Courtesy: Disney Parks Experience

The centerpiece of the Avengers Campus is WEB SLINGERS, a Spider-Man attraction.

The attraction takes visitors on an interactive mission in which they must catch runaway spider robots that threaten to destroy the campus.

“It allows our guests to feel like they are throwing webs just like Spider-Man would, without the need for an additional joystick or blaster,” said Caroline May, director of creative services for Disney Imagineering.

“We use completely innovative technology in which we follow your movement, at 60 photos per second.”

The Spider-Man ride and the rest of the 8-acre Avengers Campus were expanded from the Guardians of the Galaxy Mission Breakout ride. It is a space with free fall that Disney engineers reused from the old Tower of Terror, which previously seemed the lair of failed Hollywood actors and actresses.

A distinctive style on the Avengers Campus

The Avengers Campus has a modern and stylish design. Courtesy: Disney Parks Experience

The new architectural design could be described as neo-Marvel, modern in style and with many tributes to heroes, including a gleaming Avengers Command Center.

Strange and the rest of the costumed Avengers appear to be in perpetual motion, compared to, say, Mickey Mouse strolling through Disneyland and stopping to take photos.

Okoye from “Black Panther” conducts training with Dora Milaje, the dedicated bodyguards. Spider-Man climbs up the walls, face up and face down, and somersaults up to 18 meters in the air.

The Pym Test Kitchen is inspired by the enlargement and shrinkage experiments of “Ant-Man and the Wasp.” Credit: Paul Vercammen / CNN

The food at Avengers Campus is an eclectic mix with a story behind every bite and plenty of meatless alternatives.

The Shawarma Palace, which offers chicken and vegetarian wraps, is said to be inspired by a discovery after the Battle of the Avengers in New York.

There’s also the Taneleer Tivan Candy Bundle, which includes a sugar high you can hold in your hand, a spiral churro that the Avengers-obsessed mother-daughter team had their eye on along with other snacks.

But the big skillet on campus, the biggest restaurant, is the Pym Test Kitchen, which offers “Impossible” plant-based products.

“Here (eating) is definitely guilt-free,” said chef James Holmes. “When you’re playing on campus and you make that heroic effort, you definitely need to feed yourself.”

The Pym Test Kitchen grew out of “Ant-Man and the Wasp” experiments with its history of dramatically shrinking or massively growing things.

The Pym Test Kitchen on the Avengers Campus is an eclectic combo. Fun dishes include a massive chicken breast on a small bun. Credit: Paul Vercammen / CNN

There are giant, tiny meatballs, a gigantic chicken breast in a tiny bun, and the gargantuan “Pym-ini sandwich.”

That $ 100 behemoth of toasted focaccia is meant to be sliced ​​to feed six or eight people and is filled with ham, provolone cheese, salami, sun-dried tomato and comes with a marinara sauce for dipping.

There is a full-size version of the Pym-ini for $ 15 for anyone who doesn’t want to jump into the big sandwich with friends and family.

In search of souvenirs

The Avengers Campus will be the dream of everyone who loves toys and souvenirs. Credit: Paul Vercammen / CNN

The Avengers Campus offers tons of superhero memorabilia, from clothes and figurines to Spider-Bots, which move on eight legs with a simple touch of the remote.

Robots can also adopt the look and personality of other Avengers characters, such as Iron Man, and fight other droids.

“They have (micro) chips and they are smart,” said Brad Schoenberg, vice president of brand marketing for Disney products. They recognize things. We work with the engineers who have created all this, a very talented group.

In addition to all the high-tech merchandise, there are also plenty of Avengers-style clothing from baseball caps and jackets, and the Web logo is everywhere.

The Avengers Campus offers a mix of merchandise, from jackets and hats, to Avengers toys. Credit: Paul Vercammen / CNN

“Spiderman, he’s the coolest,” said park visitor Rashaun Tandon, another fan who is looking forward to the opening of the Avengers Campus. “I think it’s Stan Lee’s best creation.”

Lee, who passed away in 2018 at age 95, drew himself into pop culture history and stardom with his enduring Avengers.

Lee’s legacy thrives, with a theme park campus that his heroes and even some of his enemies can call home.

Mind you, don’t look for the sarcastic and blasphemous Deadpool. After all, it is a Disney world.