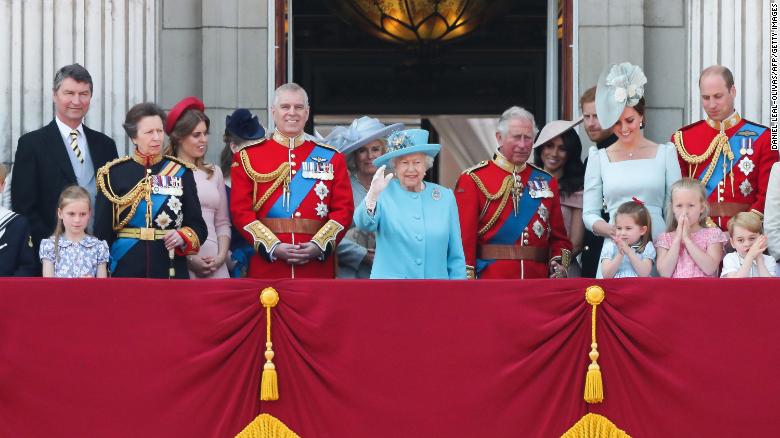 They announce 4 days of celebrations for the reign of Isabel II 0:43

London (CNN) – Not long ago Prince Harry and Meghan Duchess of Sussex claimed that members of the British royal family had made openly racist comments about their firstborn’s skin color.

The implications were clear: There was concern at the heart of the monarchy about how a baby who might look different from the rest of the family because of his biracial mother would fit in.

The consequences were enormous. But reactions were largely divided between people who saw it as a sign of institutional racism in the monarchy and those who thought the couple had made the whole thing up. After all, there was no hard evidence to back up the claim.

But now there are documents.

The British newspaper The Guardian unearthed documents this week, buried in the UK’s national archives, revealing that the queen’s courtiers banned the hiring of ethnic minority immigrants and foreigners for administrative posts at Buckingham Palace until at least the end of the decade 1960.

According to the report, the queen’s chief financial officer told officials in 1968 that “it was not, in fact, the practice of appointing immigrants of color or foreigners” to clerical positions, but they were allowed to be hired as domestic servants. .

The palace has not clarified when the policy ended, only telling CNN in a statement that “claims based on a second-hand account of conversations more than 50 years ago should not be used to draw conclusions about current events or operations. ».

The investigation also revealed that decades ago, the palace used a parliamentary procedure known as ‘queen consent’ to obtain an exemption from a UK law that is designed to prevent discrimination in the workplace, including the hiring of people. because of their ethnic origin. The queen is still exempt from those laws today, The Guardian reported.

“The Royal Household and the Sovereign one comply with the provisions of the Equality Law, in principle and in practice,” the palace told CNN in its statement. “This is reflected in the policies, procedures and practices of diversity, inclusion and dignity at work within the Royal House.”

What is missing from these statements is any apology for the racist policies of the past, or an understanding of the steps the royal family plans to take to correct those mistakes.

This silence from the queen’s inner circle will come as no surprise to anyone familiar with the behavior of the palace. Queen Elizabeth is a very traditional monarch who rarely makes public statements. He belongs to a generation that believed that remaining silent on almost all matters was the best way to preserve the dignity of the crown.

This strategy has been very useful for the monarch during her 69 years on the throne, although its success is due in part to the fact that the queen enjoys enormous popularity among the British public, many of whom accept that she is a woman of another generation. and they don’t expect it to change.

But the palace’s reaction will be disappointing for the growing chorus of people calling for change, at a time of racial reckoning in the UK and around the world. And for younger generations of royalty, the queen’s decades of silence could complicate their lives when the time comes for the crown’s succession.

Some of the youngest royals have spent the past decade being public figures, speaking out on issues like mental health, climate change and equality. This has been largely supported by younger British citizens who have not grown up in the same culture of respect for the monarchy as their parents and grandparents.

Now younger royals will find it more difficult to square their enlightening public image with the fact that, so far, they have not condemned their family’s institutionally racist hiring policy in the past. It will be especially difficult for Prince William, second in line, who said publicly in response to the accusations of racism from Harry and Meghan that royalty was “not a racist family at all.”

All of this is relevant to the unwritten contract that exists between the monarchy and its subjects.

The royal family can only be guaranteed its existence if the public supports it. In the interview with Oprah Winfrey, Harry revealed how “scared” his family members are “that the tabloids will turn on them.” Although the prince may have exaggerated the influence newspapers have on the public, his view of the importance of public relations to his family is correct.

The point at which all of this becomes dangerous for royalty is when the public demands greater transparency and accountability, but the palace is uncompromising.

“This is why public opinion plays such an important role,” said Catherine Haddon, a constitutional expert at the think tank Institute for Government. “With the increasing loss of deference in society and increasing pressure for greater transparency, it is difficult for the monarchy to hold on to the old ways of doing things.”

Unlike the claims of racism and neglect made by Harry and Meghan, these employment practices are demonstrable. They do not present a favorable image of the current monarch, and it is also worth noting that these policies existed during the life of the first in line to the throne, Prince Charles, who is supposedly a more modern royal than his mother. .

What is worse for the monarchy, is that it could make those who disagree with the Sussex accusation reflect on the present: if the current royals were able to turn a blind eye to racist policies in their day, is it really implausible for them to make racist comments about a baby’s skin color?

Kehinde Andrews, professor of black studies at the University of Birmingham, is not optimistic that the story will change public opinion about the monarchy in any significant way.

These debates are not about rational thinking or testing. People will probably put it in the context that it is historical and of its time, “Andrews told CNN. “The royal family has a terrible race record, but no incident has radically changed the mindset before, so why should I do it now?”

Andrews’s analysis is likely to be spot on in the short term: the British are highly unlikely to turn their back on their queen in the short term. But the combination of hard evidence of racism within the monarchy and a younger generation that finds such behavior unforgivable will make the monarch’s silent leadership style impossible for her descendants who will one day sit on her throne.