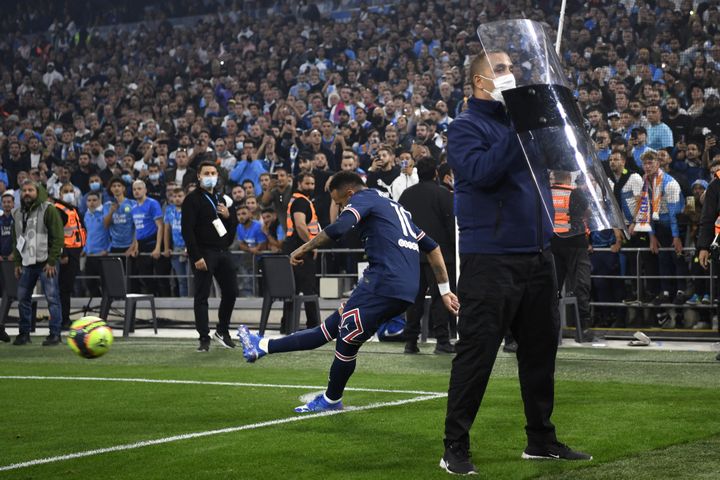 Several hours before the kickoff of the Classic, Sunday, October 24, the match had already started in the streets of Marseille. In front of the Velodrome, the fervor rose crescendo. But in the first half of the game, “hundreds of people tried to get in “ in the stadium despite the closed doors, requiring the intervention of the police, explained the Prefecture of Police on Sunday evening. Tear gas was fired and a commissioner was injured “in the face“.

Half a dozen supporters, arrested on Sunday in front of the Vélodrome stadium, were sentenced, Wednesday, October 27, to terms of up to two years in prison, all accompanied by stadium bans, the prosecution communicated.

In total, 21 people were arrested and 17 taken into police custody, prosecuted for degradation, rocket possession and violence or even insults or rebellions against the police. During the second period, a spectator also entered the field and approached Parisian Lionel Messi before being evacuated by several stewards.

Neymar protected by the security service during the PSG-OM match on October 24. (CHRISTOPHE SIMON / AFP)

Five defendants who admitted their participation in the incidents were tried on Monday. Three were sentenced to terms ranging from four months suspended to two years firm, and the other two to fines. All were banned from the stadium for a year, said the Marseille prosecutor’s office.

Among the other defendants, a 42-year-old man from Essonne and member of the OM supporters’ club of the “Winners” was sentenced for “rebellion” to six months of house arrest under electronic surveillance and one year of stadium ban. Another man was finally sentenced to 600 euros, including 300 suspended by a criminal order.

Four other defendants benefited from an alternative procedure to prosecution with three reminders of the law, and an obligation to follow a citizenship course. Another must be judged this Wednesday in immediate appearance, three others will be summoned later, and two have benefited from a classification without follow-up.

Before the meeting, the president of Olympique de Marseille, Pablo Longoria, appealed for calm so that the match remains “a football moment”.

OM has already been sanctioned twice this season by the LFP disciplinary committee for incidents in the stands, after the Nice-OM match on August 22 and the one in Angers on September 22. Since then, OM is under the threat of a withdrawal of one point in the standings in the event of a repeat offense.

One thought on “Incidents during OM-PSG: up to two years in prison and stadium bans – franceinfo”