In Paris, a ceremony to record the restitution in Benin of 26 works from the royal treasures of Abomey – archyde 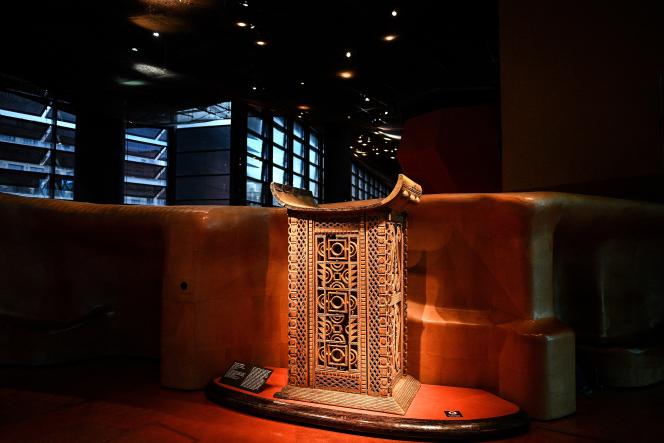 It is a ceremony with strong symbolic value which is held on Wednesday October 27 in Paris: France acts the restitution to the Benign of 26 works from the royal treasures of Abomey preserved so far at the Quai Branly museum.

Emmanuel Macron will preside over the ceremony, which will be held at 4 p.m. in this Parisian museum housing thousands of African works partly looted during colonization. Benin will be represented by its Minister of Foreign Affairs, Aurélien Agbenonci, before a possible visit by President Patrice Talon in November. The ceremony will be an opportunity to detail the conditions for the return of the works as well as the schedule, according to a government source.

Among the 26 works of art are totem statues from the ancient kingdom of Abomey as well as the throne of King Béhanzin, looted during the sacking of the Abomey palace by colonial troops in 1892. They are exhibited. until Sunday at the Quai Branly museum. “The return of these objects is an important act in the history of the collections”, estimated Wednesday its director, Emmanuel Kasarhérou. “It is important that the heritage of each country is sufficiently represented in each country”, he added on RFI, referring to his “Great joy” to hand over these pieces “In expert hands”.

A museum under construction in Abomey

The French head of state pledged during a speech at the University of Ouagadougou in November 2017 to make temporary or final restitution of African heritage in France possible within five years. On the basis of a report submitted by academics Felwine Sarr and Bénédicte Savoy, who will speak on Wednesday, he had decided to return 26 works requested by the authorities of Benin, as well as the saber and the scabbard of El Hadj Omar Tall, requested by Senegal.

This report had drawn up a return schedule and an inventory of the tens of thousands of objects that the settlers brought back from Africa. He had been praised but also criticized by certain museum directors concerned about the “Circulation of works” to “Universal character”. Finally, a law was passed in December 2020, allowing exceptions to the principle of “inalienability” of works in public collections, because they had been the subject of characterized looting, making these restitutions possible.

Also read the interview: Article reserved for our subscribers Emmanuel Kasarhérou: “We have decided not to do the restitution of works in Benin on the sly”

Two curators from Benin have been in France for more than a week to organize the return of the works “Requested by Benin”Mr. Kasarhérou told AFP last week. In Benin, they will go first “In a place of storage, then they will be presented in other places in a permanent way: the old Portuguese fort of Ouidah and the governor’s house, historic places of slavery and European colonization, located on the coast,” while waiting for the construction of a new museum in Abomey ”, in the former royal palace of the kings of Dahomey, inland.

More than 90,000 African works in France

According to experts, between 85 and 90% of African heritage is outside the continent. Since 2019, in addition to Benin, six countries (Senegal, Côte d’Ivoire, Ethiopia, Chad, Mali and Madagascar) have submitted restitution requests. At least 90,000 objects of art from sub-Saharan Africa are in French public collections. Some 70,000 of them are kept at Quai Branly, including 46,000 who arrived during the colonial period.

The Quai Branly has started a long “Almost exhaustive work on the 300,000 works of the museum, which do not concern only Africa, to identify those which would have been taken in a violent way without the consent of the owners, by means of war or by coercion of the administration colonial “, says Mr. Kasarhérou. Corn “All the objects which are in the collections in Europe have not been stolen”, he specifies: “This may be the idea that is running now, but it is not historically correct. In what proportion? This is the whole purpose of our work. “

Read also “Colonialism was a European project, just like the looting of works of art”

Many objects have indeed passed through several hands: administrators, doctors, soldiers or their descendants have donated them to museums. Other works were offered to religious, acquired by collectors of African art at the beginning of the 20th century.e century or brought back during scientific expeditions.

One thought on “In Paris, a ceremony to record the restitution in Benin of 26 works from the royal treasures of Abomey – archyde”