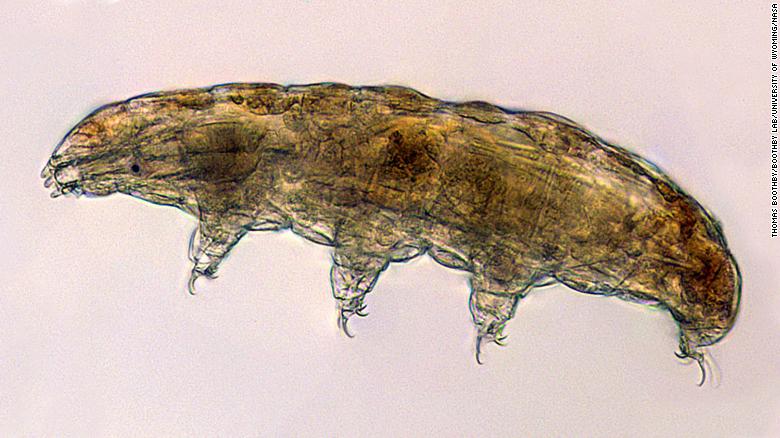 (CNN) – Astronauts on the International Space Station (ISS) are about to receive a special delivery.SpaceX is scheduled to launch its 22nd cargo resupply mission to the space station on Thursday at 1:29 p.m. (Miami time).

The spacecraft will carry more than 3,300 kilos of supplies, scientific research experiments and technology demonstrations. You can see the launch live at the NASA website, with coverage starting at 1 pm (Miami time). The vehicle will dock with the space station on Saturday.

On the ship are 5,000 tardigrades, also known as water bears, and 128 glow-in-the-dark squid babies.

Both will participate in experiments on the space station, including studying the tolerance of water bears to the space environment.

The researchers also want to know if the lack of gravity affects the symbiotic relationships between squid and beneficial microbes.

Other experiments that are directed to the station are a portable ultrasound, remote control of robotic arms using virtual reality, the analysis of how kidney stones form in space, the study of the oral microbiome (which is in your mouth) and the production of cotton more resistant to stress. More than a dozen of the experiments to be put into orbit belong to student researchers.

Hundreds of science experiments are conducted on the space station every day; after all, it is an orbiting laboratory. Astronauts supervise these experiments and communicate their observations to scientists on Earth. The research helps us better understand life in zero gravity, as well as discovering benefits that can be applied on Earth.

The cargo vehicle also carries new solar panels, which will increase the amount of energy available on board the space station.

The compact panels were used to make the ISS Roll-out Solar Array, or iROSA, which unfolds like a long carpet. Astronauts will install the kit outside the space station during two spacewalks in June.

Under the microscope, the tiny tardigrades look like bears. It is common to find them in the water, and sometimes they serve as nemesis in «Ant-Man and the Wasp‘But tardigrades are known for their ability to survive and even thrive in the most extreme environments.

“Tardigrades are a group of microscopic animals known for their ability to survive a range of extreme conditions,” said Thomas Boothby, associate professor of molecular biology at the University of Wyoming and principal investigator of the Cell Science-04 tardigrade experiment. at a press conference last week.

‘Some of the things that tardigrades can survive are drying out, freezing, and heating above the boiling point of water. They can survive thousands of times more radiation than we can and can go days or weeks with little or no oxygen.

Tardigrades look a bit like tiny bears under the microscope, hence their nickname “water bears.”

In fact, tardigrades can tolerate these extremes better than most life forms, and what is more extreme than space? It is not the first time that tardigrades have gone into space, and even there may be some on the moon, after a mission carrying them crashed to its surface.

“They have been shown to survive and reproduce during spaceflight, and can even survive prolonged exposure to the vacuum of outer space,” says Boothby.

Boothby’s experiment is designed to look at the adaptation of tardigrades to life in low Earth orbit, which could lead to a greater understanding of the stressors humans face in space.

They study eye health in astronauts 1:18

“Ultimately, this information will allow us to understand how one of the most resilient organisms on Earth is able to survive the rigors of space flight,” he said. “And our hope is that this knowledge will provide avenues to develop countermeasures or therapies that help safeguard astronauts during extended space missions.”

The UMAMI experiment stands for “Understanding Microgravity on Animal-Microbe Interactions,” and Jamie Foster, a professor in the department of microbiology and cell sciences at the University of Florida, is its researcher. principal. The professor is interested in analyzing how microbes beneficial to health communicate with animal tissues in space.

This image shows a juvenile squid swimming in seawater just after hatching.

“Animals, including humans, depend on our microbes to maintain a healthy digestive and immune system,” says Foster. ‘We don’t fully understand how spaceflight disrupts these beneficial interactions. The UMAMI experiment uses a Hawaiian glow-in-the-dark squid to address these important animal health issues. ‘

Hawaiian squid (Euprymna scolopes) They are only 3 millimeters long and are the perfect model to study this for for two reasons.

These squids have a special light organ inside the body that can be colonized by a species of luminescent bacteria.

The squid can then use that bacteria to glow in the dark. This symbiotic relationship occurs between a single species of bacteria and one type of host tissue, making it easy for researchers to follow the development of this process, Foster said.

Squids also have an immune system very similar to that of humans. Researchers will be able to find out whether space flights alter the mutually beneficial relationship between animals and their microbes.

“When astronauts explore space, they take a company of different microbial species with them,” explained Foster. “And it’s really important to understand how those microbes, collectively called the microbiome, change in the space environment and how those relationships are established.”