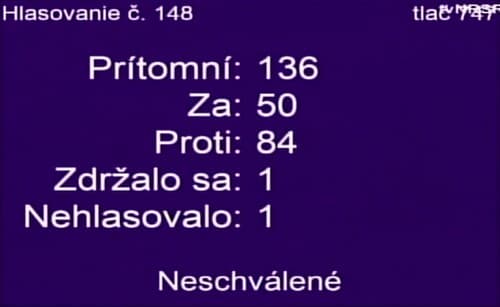 Pungent APPEALS Sulík: There was a criminal complaint because of cocaine! Fico foamed, the head of SaS went after the report card

LIVE Conduct of the sitting in Parliament:

According to Sulík, it was very good for him that the whole club OĽaNO and Sme rodina also voted against the proposal. He is grateful to Igor Matovic for his words. Fico’s motion to appeal was said to be very weak. “It’s a strong signal and humanly it fits me very well and I see that I and the SaS party have very strong support in the coalition. It is these steps that are very good for the coalition to recover.” says Sulík and announces the support of SaS deputies against the prepared proposal to dismiss the Minister of Labor Milan Krajniak (We are a family).

Richard Sulík remains in the position of Minister of Economy. He was held in office by 84 votes of deputies. The whole club OĽaNO, SaS and Sme rodina held him in the position of minister. Only deputies from the opposition were in favor of his dismissal.

Members of the non-parliamentary party Hlas-SD will not support Sulík in office. According to them, he showed in full nudity that he did not care in Slovakia, because “he already has his future taken care of on an Australian ranch”.

Shortly before the vote on the support for support, the OĽaNO club was slightly surprised by Sulík. Igor Matovič, as the leader of the movement, announced that despite the “SaS treatment”, he asked the deputies for this club to keep Richard Sulík in office. “The public interest of the country and also for the people who elected us is bigger than these shells. I believe that this will be appreciated in the SaS club as well, and it will be like a new beginning, but if we want to push it like this, let’s put it down.” said Matovic. “In return, we expect that they will no longer behave like such a ‘grumpy’ partner. Sulík promised me allegiance beyond the grave, unfortunately there were very, very few such moments during that reign.” the Minister of Finance complained.

Shortly before the briefing, however, the Matovič family went to consult together with MP Jozef Proček. So far, however, it is not certain what.

VIDEO OĽANO’s position on the vote of confidence in Sulík:

The debate on this item was closed and thus the meeting. The morning’s meeting is over and will continue with the next agenda at 2 p.m. A vote on Sulík’s appeal is expected at 5 pm. Before the vote, Sulík revealed that he has support from the Sme rodina club.

Today, for the first time at the end of the debate, Sulík speaks behind the lectern. After the speech of Roman Foltin (SaS party manager), he thanked for the trust. Sulík names point by point what they did at the ministry in connection with rising energy prices.

The Minister of Economy Richard Sulík (SaS) has already come to the Chamber.

After Mazurek, Erik Tomáš (unclassified) from Hlas-SD also stood behind the plenary in the plenary, accusing Sulík that they had known about higher energy prices since the summer.

After the opening point of the sitting, MEPs resumed the debate on Sulík’s dismissal. ĽSNS leader Marian Kotleba is the first to speak in the debate, followed by Milan Mazurek (unclassified).

The deputies of the National Council (NR) of the Slovak Republic devoted the entire fifth day of the 48th meeting to a discussion on the motion of censure on the Minister of Economy Richard Sulík (SaS). Seven legislators spoke in writing. The head of the Ministry of Economy also took part in the debate several times. At the end of the day, five more Members came to the debate orally. The motion for appeal was initiated by the opposition Smer-SD.

At the beginning of the day, Smer-SD leader Robert Fico asked Sulík to present his school-leaving certificate, indicating that it had been falsified. The minister then brought it. He stressed that he lives an honest life, not a “gay” one.

Several opposition MPs also asked about a ranch in Australia. They wanted to know how big the ranch was, how much it cost and with whom it owned it. Sulík made it clear that he bought it in 2019 together with two other natural persons indirectly through the company and took out a loan for it.

According to the submitters of the motion to dismiss him, Sulík did not present a single rational solution, he refused. He mentioned, for example, the introduction of transparent regulation of natural monopolies in the energy sector, the adoption of an amendment to the Act on Critical Infrastructure, an amendment to the Atomic Act or measures to put Mochovce in a functional state.

“Previous public statements and practical inactivity of Sulík as the Minister of Economy of the Slovak Republic confirm the absolute incompetence of Sulík to perform this extremely important executive function,” MEPs state in the explanatory memorandum to the proposal.

In the morning this morning (October 27), the Plenum should also deal with the amendment to the Tax Code from the workshop of the Ministry of Finance (MF) of the Slovak Republic. It should, among other things, exclude tax-unreliable persons. The aim of the bill is to create new effective tools in the fight against tax fraud and to motivate tax subjects to voluntarily fulfill their tax obligations. Subsequently, MEPs should continue to discuss the motion of censure on the Minister of Economy.