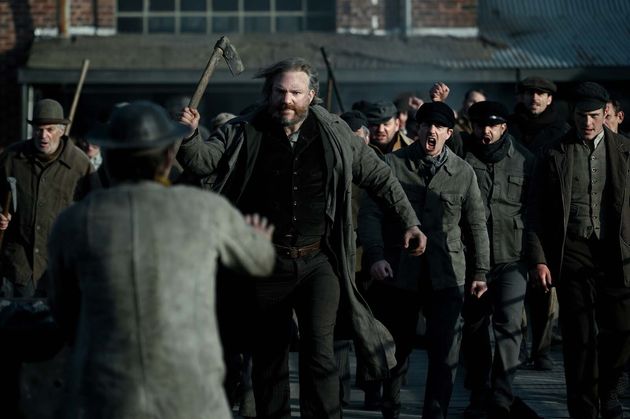 TELEVISION – Germinal Even though it was written over a hundred years ago, the story told in the novel byEmile Zola is still as contemporary as ever. This new adaptation – a series of six episodes aired on France 2 from this Wednesday, October 27 at 9:05 p.m., also available on Salto – proves it once again. With the recent echo of the crisis in yellow vests.

A rich cast of Guillaume de Tonquédec (Do not do this, do not do that) to Alix Poisson (Parents instructions) through Sami Bouajila (A son) or Thierry Godard (Gears), more than 2,000 costumed extras, a filming in the cold of the Valenciennes region in the middle of winter with a lot of 22 tons of coal: Germinal is above all a huge historical fresco with an estimated budget of 12 million euros. And if the dialogues are contemporary, this adaptation does not compromise with the political dimension of the work of Émile Zola published in 1885.

“We wrote Germinal during the yellow vests, and this is also what nourished our scenario, just like the directing work of David Hourrègue [le réalisateur, NDLR]”, Tells the screenwriter Julien Lilti, on France Inter this Tuesday, October 26. If France Television had asked the team of authors to “modernize” Germinal, Lilti quickly realized that “modernity was there in the novel”.

“It’s always fascinating when tackling a classic to see how things could have changed, the characters seem far from us … and at the same time how nothing has changed. This paradox is very enlightening on today’s world ”, he assures us. And for good reason, Germinal recounts the insurgency of miners triggered by a drop in their wages when they already have difficult working conditions, and the bloody repression it entails. As if Émile Zola had perceived that the class struggle between oppressed workers and capital would permeate a whole century of history.

David Hourrègue, director of this great historical drama, claims the political side of its history. “The way in which the power in place is breaking up a popular movement will completely echo everything we heard at the time of the yellow vests: ‘who is the leader?’, ‘We don’t understand what they want’”, he confides in the production notes of the series. “The struggle that is at the very heart of Zola’s story in Germinal currently resonates very strongly in France and in the world ”, also indicates Nathalie Biancolli, director of the international fiction of France Télévisions.

For his first major role on television, it was the 24-year-old actor Louis Peres who took on the costume of Etienne Lantier, a young instigator of the strike in the settlements which galvanized the crowds. And the “obvious echo” of Germinal with the crisis of the yellow vests is for him the proof of the universal character of the work of Émile Zola.

“It is important that Germinal be redone today, as a booster shot. It can obviously have an echo with the yellow vests, but also with Black Lives Matter, or what happened in Burma last year ”, he describes at the microphone of South Radio. “In 100 years, we will still be able to say how current it is. It is universal and it is the very principle of geniuses, I believe. ”

This parallel between the miners of Émile Zola and the demonstrators of the movement born around the roundabouts is not unprecedented. In November 2018, when the yellow vests crisis reached its peak of participants, the writer Laurent Sagalovitsch qualified them as “new minors” in a blog by Slate. “The ‘yellow vests’ have the wrong century. One hundred and fifty years earlier, they would have had as a fierce defender Émile Zola in person, ”he writes.

And to quote a few passages from the 1885 novel where “we replace the price of eggs by that of fuel and here we are. Nothing has changed. The same bitter observations, the same demands, the same bourgeois who dig deep into them. History is an eternal restart. The miseries of yesterday are worth the precariousness of today. ”

See also on The HuffPost: Inspired by his character yellow vest, this sentence of Pio Marmaï on Macron goes badly