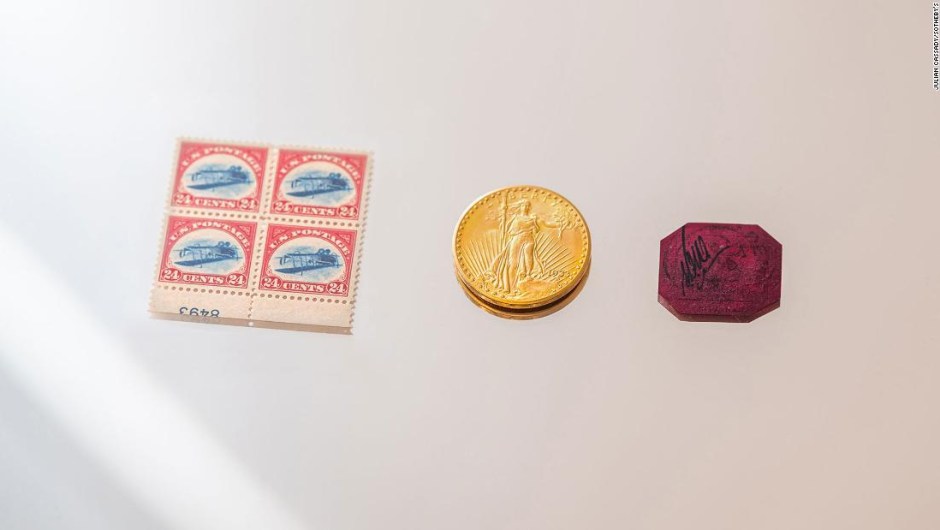 (CNN) – Two of the world’s most coveted stamp collecting items and one of the world’s rarest coins could fetch a combined price of $ 37 million. when they are auctioned in New York next week.

The three collectibles – a stamp from a former British colony, a 1933 Double Eagle coin and a sheet of US postage stamps printed with a unique mistake – could set new auction records within minutes of each other. according to Sotheby’s, which is organizing the sale.

The oldest of the items is a 165-year-old Magenta penny, described by the auction house as the “world’s most famous and valuable stamp.” Hailing from British Guiana, now known as Guyana, it is believed to be the last surviving stamp of its kind.

At the time of its creation, all the stamps of the colony were imported from Great Britain. But a shortage in 1855 led the British Guiana postmaster to order a new series from a local newspaper printer, according to Sotheby’s.

The copy that will go on sale next week is the only known survivor. After being rediscovered by a student in 1873, it has since gone through a number of prestigious collections, beating the record price for a single stamp each time it was put up for auction, Sotheby’s said.

The magenta one-cent stamp of British Guiana, produced in 1856, is the last of its kind known. Credit: Julian Cassady / Sotheby’s

In 2014, it was bought for $ 9.5 million by shoe designer Stuart Weitzman, the owner of the three items featured in next week’s auction. In the tradition of the previous owners, Weitzman has marked his initials, SW, on the reverse of the stamp.

This one-cent stamp is expected to sell for up to $ 15 million. The same goes for another of Weitzman’s collectibles: an exceptionally rare $ 20 coin dating from the 1930s.

The last gold coin to be minted for circulation in the United States, the 1933 “Double Eagle,” never entered circulation. With Liberty on one side and an eagle in flight on the other, almost all of them were returned and cast.

Sotheby’s auction house has dubbed the 1933 Double Eagle “the most famous coin on the planet.” Credit: Sotheby’s

Only a handful of coins were saved from this fate, and a small number entered the market. But in 1944, a Secret Service investigation declared that any of them found in the hands of collectors would be considered stolen, according to Sotheby’s.

The 1933 Double Eagle that goes on sale next week is the only one that a private individual can legally own, following a legal battle between the US Treasury and a former owner.

In 2002, it became the second most expensive U.S. coin ever sold at auction, fetching $ 7.6 million.

The last of the three Weitzman objects, which Sotheby’s has collectively dubbed the “Three Treasures,” is a sheet from the earliest United States airmail stamps, dating back to 1918.

But in addition to marking a new type of philatelic collectible, the stamps are famous for an unusual mistake: due to a printing error, the images of the plane on the front are upside down.

A printing error causes airplanes to appear upside down on 100 of these 1918 airmail stamps. Credit: Sotheby’s

Known as “inverted Jennies,” in reference to the plane’s nickname on the design, only 100 stamps were printed before the error was discovered. The block of four stamps that will go on sale Tuesday is expected to fetch between $ 5 million and $ 7 million.

Sotheby’s world director of books and manuscripts, Richard Austin, said in a press release that the three articles “occupy a permanent place in history, and in our collective imagination.”

In a press release, Weitzman said he had fulfilled “a lifelong dream of collecting the greatest rarities in the two great areas of stamp and coin collecting and then putting these extraordinary treasures, hidden for decades, in public view. continuously ».

“Today my dream is to leave a charitable legacy to which the proceeds from the sales of these treasures will go,” he added.