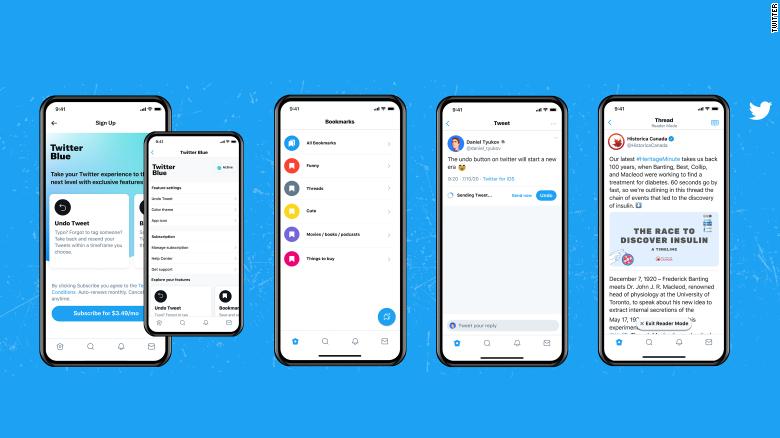 (CNN Business) – Twitter is not yet yielding to user demands for an “edit” button, but it does offer something similar: an “un-tweet” option as part of its new subscription service, Twitter Blue, which debuts in Canada and Australia on Thursday. .

The basic service will remain free, but for a monthly fee, users can access special features that Twitter claims will bring the platform experience «To the next level».

What does it consist of?

The “undo tweet” feature allows users to preview a tweet and set a timer that lasts up to 30 seconds before it’s posted so you have a chance to correct or rethink it.

Other features of Twitter Blue include the ability to change the Twitter application icon color and appearance within the application. Subscribers also have access to a dedicated customer support team.

Twitter has been free to use since its founding 15 years ago and relies on advertising dollars for revenue.

But as the advertising market becomes more competitive and complicated, technology and media companies have sought to make money directly from their users.

Twitter CEO Jack Dorsey He said in July 2020 that his company was exploring subscriptions as a “new revenue stream.”

Twitter will not accept any type of political advertising 1:17

The product has been in the works for a long time. Researcher Jane Manchun Wong discovered some of the service features earlier this year and tweeted specifically about Twitter Blue last month.

Twitter’s app store listings were also recently updated to include Twitter Blue as an in-app purchase.

“We will listen to feedback and create even more features and benefits for our subscribers over time,” the blog post read.

More than 90% of tweeters in Mexico would vote, according to study 3:27

Twitter has been working on other payment products. Last month, Twitter acquired Scroll, a startup that offered ad-free viewing of news sites for a monthly fee.

Earlier this week, Twitter ad A partnership with climate journalist and meteorologist Eric Holthaus on Tomorrow, billed as a local weather news service, Tomorrow will also include reports published in Revue, a newsletter that Twitter acquired in January.