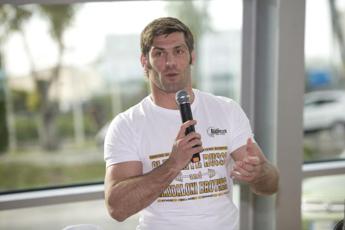 No Tokyo Olympics for Clemente Russo. The European Olympic qualifying tournament, whose start is set for next June 4 in Paris, will not feature the blue captain. The Marcianise champion, despite being among the participants in the London qualification event in March 2020, suspended due to the outbreak of the Covid-19 pandemic, could not fight due to indisposition, losing in the round of 16 for Walk Over. The athlete tried to request a wild card from the IOC Boxing Task Force, delegated to the organization of the Olympic competition, to be admitted to Tokyo 2020, which was followed by a similar initiative by both the FPI and the Coni, first of all with the President Malagò. This request, to the great regret of both Clemente and the entire national boxing movement, was not accepted. Russo will be barred from participating in his fifth consecutive Olympics and thus hitting an absolute record for a boxer. “I can’t find the words to describe the sensations I feel. A punch straight to the stomach, one of those that leave you breathless. One step away from Tokyo 2020, I see the possibility of being able to participate in the qualifying tournament fade away. wild card available for Italy but, until before the start of the Olympics, I will continue to train hard in the hope that something will change and I will be given the opportunity to play my cards “, says Russo.” World Cup golds and two Olympic silver in four editions of the Games. This is history, no one can ever take it away from me. I can consider myself a boxer and a lucky man. A man who made himself alone, with his own hands and who has never had discounts from nobody – continues the blue captain -. I am happy with the path made so far; I carry so many wonderful sporting memories in my heart. In the future, in addition to dedicating my heart and soul to the family “.” I will certainly try to carve out an active role in the boxing world. I will think about giving something back to sport, which has always given me so much, and which is the guiding star of my life and that of my loved ones. Our three wonderful girls, Rosy, Janet and Jane, already play sports at good levels and with great passion, like mom and dad. The twin Janet already has very clear ideas and has chosen boxing! If good blood doesn’t lie, I’ll soon be back at ringside ”, concludes Russo.

1 thought on “Olympics, Russo will not go to the Tokyo Games”