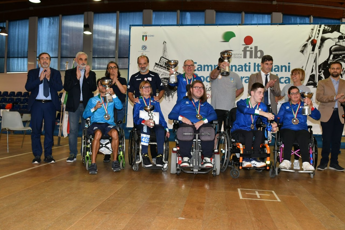 Two Italian titles in Veneto, one in Piedmont, one in Lombardy: this is the response of the Italian Paralympic Boccia Championships, held at the Federal Technical Center in Rome. Riccardo Zanella of the Orange Bowl of Padua in the BC1 category, Claudia Targa of the Orange Bowl Padua in the BC2, Renata Busettini of the Bocciabili Sportento Torino in the BC4 are the new Italian champions of Boccia Paralimpica. Mirco Garavaglia of Superhabily (Milan) is the only one to reconfirm himself as champion in the BC3 category. In the tricolor finals, Riccardo Zanella overtook Pietro Melone della Fenice (MB), Claudia Targa beat Ciro Montanino of the Polha Varese club, Garavaglia won against Gabriele Zendron of Boccia Viva (TN) and Bussettini got the better of Regla M. Alvarez of the Spilimberghese company in Friuli. On the lowest step of the podium, to win the bronze medal: Diego Gilli of Bocciabili Sportento Turin (BC1), Andrea Loredan of Anshaf Trieste (BC2), Carlotta Visconti of Sportento Turin, (BC3) and Matteo Tosetti of Don Gino bosticco ( BC4). The athletes of the BC5 category, on the other hand, competed in the National Championship. To win, Ilia Padovani of Polha Varese, in second place Angelo Greco of Lupus Lecce, third place for Claudio Comino of Spilimberghese. “Just a month has passed since the conclusion of the World Cup test here in Rome, last week, in Trevi, there were the unified Italian Paralympic bowls championships (Sitting, Standing and DIR), today, instead, we are here for the Italian Boccia Championships. It was a great organizational job ”said the federal president Marco Giunio De Sanctis, interviewed, during the tricolor finals of Boccia Paralimpica. “We had to set up the Boccia courts again. We are the only discipline – continued De Sanctis – that practices Boccia in playing fields different from the discipline itself. For example disciplines such as Archery, Shooting, or Fencing take place on the same pitch. La Boccia has a different playing field than the other specialties, namely the gym which, where it is to be set up, costs and complications increase. Despite this, we are developing the Boccia to the maximum throughout Italy ”. “We will soon have Mirco Garavaglia’s commitment to the World Championships, a reason of great prestige for the Federation. We await the outcome of this international event and then prepare for next year, the last, to obtain a qualification pass for the next Paralympics in Paris 2024 ”added the FIB number one. “The five-circle display case could propel the FIB towards the dimension it deserves. Let’s not forget that bocce has been played for millennia, while our official history is 124 years long. Also for this reason, the sport of bowls also deserves the Olympic showcase ”concluded De Sanctis.