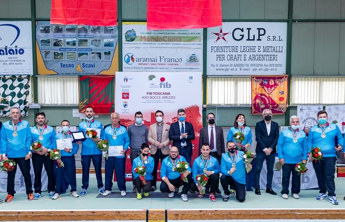 Great sport festival in Arezzo for the Italian Championships of categories B and C, male and female, organized by the Fib Toscana with the Asd Bocce Arezzo and the patronage of the Municipality of Arezzo and the Tuscany Region. In the Arezzo capital, at the end of two very intense days of competitions, eight titles in the categories of Sport were awarded for all of Raffa. 416 athletes and female athletes arrived in Tuscany from all over Italy for the race weekend. In addition to them 80 referees, managers and companions for a total of a thousand presences throughout the Tuscan territory, and in Arezzo in particular, from Friday 26 to Sunday 28 November 2021. The event started already on Wednesday 24 with the presentation press conference in the Municipality of Arezzo, to continue on Thursday with the Conference “Sport as an educational and sporting path for young people: experience delle Bocce ”and the Paralympic competition in which 50 athletes with disabilities took part. The final day crowned the winners, in the presence of the president of the Italian Bocce Federation, Marco Giunio De Sanctis, the number one of the FIB Toscana, Giancarlo Gosti, and various other political and sporting institutions in the area. went to Serena Benedetti of Flaminio Roma in the women’s and to the Salerno Alessandro Esposito of the Comunale Pagani San Raffaele in the men’s, who respectively defeated the Marches Franca Castricini of the Porto Potenza Picena and the Potentinian Donato Antonio Acucella of the Rionerese. The champion couple of Italy is made up of Giacomo Alberici and Michele Ambrogiani of the Ookos Fossombrone (Pesaro Urbino) from the Marche region; second place for Gianluca Grimaldi and Fabrizio Citro of San Gaetano (Salerno). The winning triad is the Neapolitan one of San Felice Raffaele Arianna, Nicola Annunziata and Ferdinando Giugliano, who defeated the one composed by Fabrizio Canovi, Davide Bortolani and Antonio Vitali of the Cavallino di Modena. In category C the individual women’s title went to Luisa Filabbi from Perugia of Sant’Angelo Montegrillo, who won the final among youngsters against Ilaria Treccani from Arcos Brescia. Among the men success for Andrea Bardonali of Fortitudo Roma, winning over Reggio Paolo Pavarini of Scandianese. The tricolor duo went to the Molise of ABC Castelpetroso, Carmine Rainone and Attilio Notte, who defeated the Modena players of Fioranese Stefano Lori and Silvano Ricci. The winning triad was that of the City of Rieti, made up of Maurizio Imperatori, Fabrizio Onofri and Franco Petrongari, who beat Berardino Tarquini, Secondino Mariani and Gianluca Scimia of Virtus L’Aquila. To direct the event, Antonio Dello Iacovo, national referee of the AIAB Campania. “I wanted to be present at the Italian Championships of categories B and C, an important event in an intense period of events and demonstrations – the words of the president of the FIB, Marco Giunio De Sanctis, arrived in Arezzo from Bergamo, where the International Meeting of the Atalanta Bergamasca Football Grand Prix was underway – In Arezzo, a city that has a welcoming system, we worked well with FIB Toscana, ASD Bocce Arezzo and the administration municipal for the excellent success of the tricolor competition, which concerns most of our members. Also on this occasion the FIB proved to be an active and healthy Federation. The winners are a mix of both younger and more experienced players. The latter is a characteristic of our sports movement, which allows athletes of different generations to compete at a competitive level. We are returning from many events of the various specialties and, touring Italy, I can say how Federbocce has a great future ahead. “” It was an intense and demanding event that gave us the satisfaction of showing off the beautiful spectacle of our discipline with many excellent players from all over Italy; that of involving a large part of the companies and fields of Tuscany, who responded presently – the comment of the president of FIB Tuscany, Giancarlo Gosti-. The synergy with the Municipality of Arezzo and the Bocce Arezzo company was excellent, to which our heartfelt thanks go. We showed both the sporting and competitive side and the promotional side of the bowling sport discipline “.