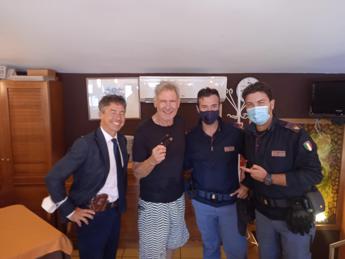 Misadventure with a happy ending, yesterday afternoon, for the Hollywood star, Harrison Ford, in this period in Italy to shoot some scenes of a film series. The American actor, yesterday afternoon, chose the seaside resort of Mondello to spend a few hours of relaxation in a suggestive and incomparable setting where the sea meets the mountains. On that occasion, the actor lost his credit card which was found during the afternoon by a Palermitan who presented himself at the ‘Mondello’ police station to deliver a credit card found on the street to the agents. Within a few minutes, following quick computer feedback, the police were able to trace the surprising identity of the card holder: Harrison Ford. In a few minutes, the police officers managed to find ‘Indiana Jones’ in a room where the actor, who arrived in Mondello undercover, had tried to regain his privacy, just before being violated on the street by some fans who had recognized him. When the director of the Mondello Police Station, Manfredi Borsellino, the son of Judge Paolo killed in 1992 in the massacre in via D’Amelio, together with two policemen, reached him, showing him and returning what belonged to him, the actor smiled. , relieved for the damage he had escaped and pleased by the idea of ​​having known a land as beautiful as it is honest. The meeting with the agents was sealed with a souvenir photo that all the protagonists of the story will jealously keep.