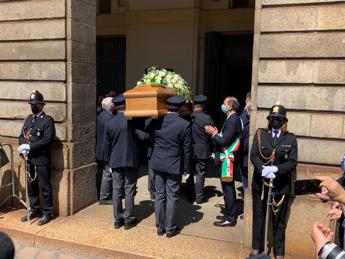 Milanese queued to pay homage to Carla Fracci, the great dancer who died yesterday. The funeral home in the foyer of the Teatro alla Scala, his ‘home’ for many years. was open around 12.30. A long applause greeted the coffin covered with white roses, even inside the foyer. The entrance to the coffin was accompanied by the music of a quartet, which played pieces from Puccini’s ‘Crisantemi’ and then a Mozart adagio, ‘Adagio from the quartet with clarinet’. Then those present observed a minute of silence, welcoming the casket the mayor of Milan, Giuseppe Sala, the president of the Lombardy Region, Attilio Fontana, the superintendent of La Scala, Dominique Meyer, and the musical director Riccardo Chailly. “She was a unique artist who made history and gave so much to her city and the whole country. I called her the star of the stars. I had the pleasure of meeting her a few months ago and she truly represented in herself Italian art and has exalted this theater in a particular way “, said Fontana. Fracci represented “a great pleasure to see, to witness her interpretations. It was pure poetry”, he added. With the death of Carla Fracci, Milan “loses a part of its recent history”. The great dancer will be remembered by her city, but to dedicate a street or a square to her “we must keep the ten-year rule, because otherwise the exceptions are not good. But we will think about it, we will see what to do”, commented Sala, welcoming the coffin. “The way to recognize the talent and love she gave to Milan pushes us to find solutions”. Bracci, Sala recalls, “she loved Milan deeply and I believe that rarely has there been such a sincere change from the city . It is one of the rare cases where everyone is in favor, where everyone has admired and loved it. It is also a good story, to be born into a normal family, with a will to build something important for you and because you is around “. The story of Carla Fracci” is also a bit of Milan, the idea of ​​giving opportunities to those who want it, the idea of ​​welcoming everyone, but she certainly gave us a luster that is difficult to imagine and be able to repeat. It is clear that there is pain, but there is also the awareness of how much love has circulated between you and the city and this I must say is refreshing “, he concluded. In the foyer of Piermarini, where access will be contingent, there are delegations from the corps de ballet, the students of the Accademia della Scala, the family and staff of the Foundation.

1 thought on “Fracci, Milanese queuing at La Scala for a last farewell”