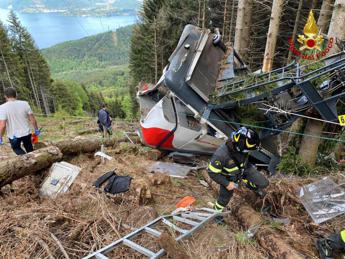 On the arrest of the three managers of the Stresa-Monterone cable car ”, serious indications of guilt emerged in relation to the crime of removal or willful omission of precautions against accidents at work, from which the disaster would have resulted. In particular, the investigative activity made it possible to ascertain serious and concrete elements of responsibility for Tadini, who although aware of the potential risks, with the consent of Perrocchio and Nerini, allowed the plant to be put into operation with the presence on one of the two cabins of the so-called ‘fork’ device which prevents the possible activation of the emergency braking system, in order to avoid the continuous blocking of the system ”. This was underlined by the Minister of Infrastructure and Sustainable Mobility, Enrico Giovannini, in a report to the Chamber on the tragic accident that occurred on the Stresa-Montarone cable car on 23 May. Read also ” The presence of the ‘fork’ – underlined the minister – prevented the breaking of the pulling cable from the stop of the cabin, which at that moment is climbing to the top, with the consequent occurrence of the facts ”. Giovannini then added that “the brake on the supporting rope consists of pliers that can tighten the supporting rope and generate the braking action to stop the trolley due to friction. Therefore a reduction in tension or its cancellation due to the breaking of the hauling rope, moreover a very rare event in the Italian experience, automatically causes the brake to intervene and the vehicle to stop ”. ” The Commission of the Ministry set up last Sunday will carry out specific investigations, which are added to the investigations of the Management General for Railway and Maritime Investigations, an independent investigative body required by European legislation. The Directorate General has already launched an investigation aimed at ascertaining the direct and indirect causes of the accident and identifying the most appropriate actions to avoid the repetition of similar events. without prejudice to the ascertainment of any liability, which is the sole responsibility of the to the judiciary ”.