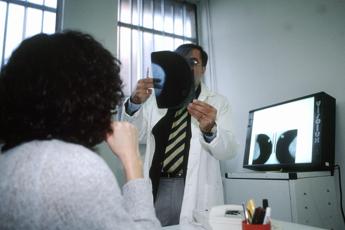 Ten state-of-the-art mammograms donated to as many healthcare companies throughout the country, to increase the availability of cancer screening tests available to women, often postponed or suspended, in this pandemic year, due to the large amount of work that has involved the hospitals. With “Screening Routine”, Roche Italia and Fujifilm Italia join forces to support the National Health Service in the fight against breast cancer, offering a contribution to the resumption of mammography screening activities, bringing women closer to healthy prevention. The ASL recipients of the donation were identified and selected by Fucina Sanità, as an independent external partner: Asl 1 of Imperia; Hospital S. Croce and Carle di Cuneo; Local social and health agency (Asst) of Lodi; Local Health Authority 9 Scaligera di Verona; Usl Umbria 1 of Perugia; ASL Roma 3; Asl 2 Lanciano Vasto Chieti to Chieti; Asl Napoli 2 Nord; Provincial Health Authority of Cosenza; Provincial Health Authority (Asp) of Palermo. The selection of public bodies was made on the basis of 6 criteria, in order of priority: consistency with national and regional programs; balanced geographical distribution at the national level and in the choice of metropolitan and provincial Asl; percentage of exams fewer in 2020 than in previous years; need to replace obsolete equipment; organizational structure of the company departments and the structures to be involved based on the expected results in the reduction of waiting lists. “These are latest generation digital mammographs – explained Davide Campari, General manager of Fujifilm Italy – among other things equipped with tomosynthesis mammary, which is the last frontier in mammography, a diagnostic tool that makes a three-dimensional view of the examination possible, in cases where second level investigations need to be carried out “. “Due to Covid, too many women did not go to the hospital to have the screening or could not do it due to the absence of staff, and therefore there was a dramatic decrease in cancer screening – commented Maurizio de Cicco, president and At Roche Italia – for this reason we have pooled our skills and decided to support the national health system. “The surveys conducted by the National Screening Observatory revealed that in the first 5 months of 2020 the decline in mammography screening was equal to 53 , 8% compared to 2019, with an accumulated delay of 2.7 months, which is estimated to result in an increase in 5-year breast cancer mortality between 8 and 9%.