Selima Giuliano: “Palermo woke up after the Capaci massacre” 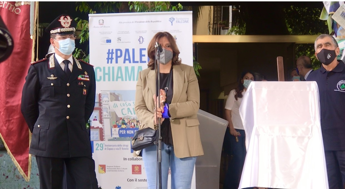 “After that 23 May 1992 Palermo, in front of this tree, said no to the mafia. Palermo woke up”. Selima Giuliano, Superintendent of Cultural Heritage of Palermo, said this in front of the Falcone Tree in Palermo, who discovered a plaque by the Falcone Foundation and the carabinieri of the Biodiversity group, in memory of the duplication and distribution project of the plants of the Falcone tree. She talks about the project carried out with the carabinieri, to collect the seeds of the Falcone tree and create thousands of trees for schools throughout Italy. “The Department of Cultural Heritage of the Sicilian Region has declared the Falcone tree of interest For the first time in history a tree has been equated with a monument, a palace or a church – says Selima Giuliano, who is the daughter of Boris Giuliano, the former manager of the mobile squad killed by the mafia in 1979 – been declared of cultural interest not for its botanical value, but for its strong symbolic value “. “On the basis of this declaration of cultural interest, other assets of symbolic value were declared in those years, such as the house where he lived, the cottage where Peppino Impastato was killed. And that is why the Superintendency joined and shared the project of the ‘Spazio Capaci’ of the Falcone Foundation, where four extraordinary artists interpret the space of this city, each giving for the first time a symbolic value to an infamous act – says Selima Giuliano – And it is always with the same conviction and the same pride that we shared the project of the Carabinieri, of the Forestry Group, which created the ‘Gemme della memoria’ project, for which the Falcone tree is spread to all schools in Italy. Today I am here as superintendent of Palermo but I am proud to be here as a small town, to discover this plaque. “Next to her, General Arturo Guarino, Provincial Commander of the Carabinieri of Palermo. “It is important for me to underline what this initiative represents: it is a bridge for life and legality thanks to the memorial monument that is the Falcone Tree”, he says. “In a few months there will be thousands of Albero Falcone brothers scattered throughout the schools of Italy who will request it”, concluded Guarino.

Torregiani: “Film tells the story of my family thrown into a whirlwind of fear”

Red and orange zone, Sileri: “Region system does not change”

See: the sentences that changed our lives, from January 28 the new podcasts

One thought on “Selima Giuliano: “Palermo woke up after the Capaci massacre””