Mottarone cable car, rescuer: “I have never experienced such a thing here” 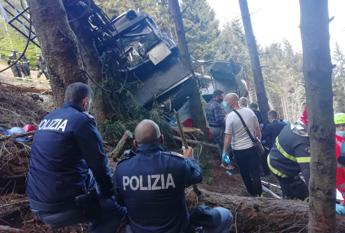 Rescuers shocked by the tragedy of the cable car that connects Stresa and Mottarone. “I have been in mountain rescue for more than 20 years, since 1998 I have been a trainer at the national school and in charge of the province of Verbania for nine years. I have never experienced something so big here, I have been to Rigopiano and other tragic events in Italy, but never like this for us “, Matteo Gasparini, head of mountain rescue in the province of Verbania, told Adnkronos, explaining that” at the beginning there was talk of 5 dead and three seriously injured, then we arrived at 13 dead in the last message that came to me. I know there are German tourists, I was contacted to understand how to deal with the embassy “. “When a Red Cross volunteer called me at 12.30, perhaps a few minutes earlier, I immediately understood that I had to go there. I was taking a bike ride to Fondotoce, a fraction of Verbania itself, I returned as quickly as possible and now I’m waiting for a helicopter that will take me there. I hope to arrive that almost everything is settled, at least from the bodies point of view, my deputy told me that they were working hard to move the bodies “. (by Silvia Mancinelli)

Varese had been teaching with a false degree for 21 years

No Green Pass in Rome, Montesano also in the square

School, Bianchi: “It reopened and there was no disaster”

One thought on “Mottarone cable car, rescuer: “I have never experienced such a thing here””