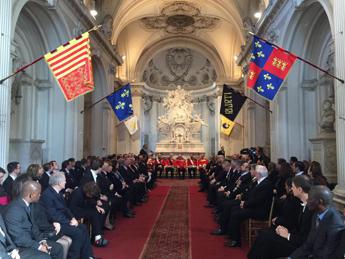 “In the context of the Sovereign Military Order there is an air that is nothing short of ‘heavy’: a fog envelops every activity, everything is viewed with suspicion – with fear – I would dare to say with fear”. Fra ‘Carlo d’Ippolito di Sant’Ippolito, Knight Bali’ of the Grand Cross of Justice of the Sovereign Military Order of Malta, candidate for the presidency, sent an open letter to the Lieutenant of the Grand Master, to all the High Offices of the Order, to the Members of the Sovereign Council, the Knights of Justice, the Procurators of the Grand Priories and Sub-Priories as well as the Presidents of the National Associations. A letter, owned by Adnkronos which, given the internal and external struggles of the SMOM, intends to bring reflection and attention back to the true nature of the religious and military Order, which has always been at the service of the poor and the sick, to a greater extent. right in view of the elections of the Grand Master which should be held between October and next November at the end of the year of Lieutenancy of Fra Marco Luzzago. At the center, an open-ended reform of the Constitution which for many would have the effect of distorting the Order and transforming it into a sort of NGO. “The feared ‘reform’ – writes the author of the letter that comes from the noble family of the Marquises d’Ippolito, one of the noble families of Nicastro originally from Mantua – wanted by everyone? Supported by a few, known by very few experts in the ‘work’ but above all not known by the potential recipients. Recipients who have been precluded from any possibility of intervening, before and during, if we exclude colored forms without any substantial character. And to this day we do not know at what point, or if reached a point “. Fra ‘Carlo d’Ippolito complains:” As for the Professed Knights, never questioned, no serious possibility of cognition of the events was given. Therefore, one should think of a modern and’ careless’ way , compared to the one already attempted, to subvert the Sovereign Military Order without any sense of responsibility: with lightness and approximation. Neglecting the caution that the shadows of uncertainty obscure in this time. Continuing in an attempt not even hidden to disintegrate the fundamental concepts, these shadows, instead of favoring with wise and appropriate decisions to the gravity of these hours with generosity and sensitivity, seem to mislead those who have the ‘responsibility’ of management “. and of the increasingly conspicuous “dissensions” within the Smom, fra ‘Carlo d’Ippolito calls the’ responsible ‘”to a greater sense of evaluation and caution in order to avoid unnecessary divisions and sterile conflicts that would lead to events that could no longer be controlled and destructive “. In the view of Fra ‘d’Ippolito, a judgment shared by many, there are no substantial reasons for a reform, the Order was born and is constituted in its founding nucleus by Aristocratic Knights Monks and is governed by the same founding principles (Tuitio Fidei – Obsequium Pauperum) from 1048 AD: “I consider it inappropriate to speak of constitutional reforms in the absence of a careful analytical reading of the same to the and of the founding ordinal principles, without forgetting the tradition that cannot be relegated to a simple trifle of salon interests, because it is itself a whole with the Tuitio Fidei and Obsequium Pauperum that characterize us “. Ippolito lashes the Knights of Malta: “Now the time has come to assume responsibility, may the Knights of Malta of today act according to their proper moral and moral conscience! Let them remember the duties towards history, as well as our authentic deposit also reached us through the spirit of sacrifice of the confreres who have often defended the sacred Jerusalem religion at the cost of their lives and all that it defends and represents for more than nine hundred years: posterity will bring us to court “.