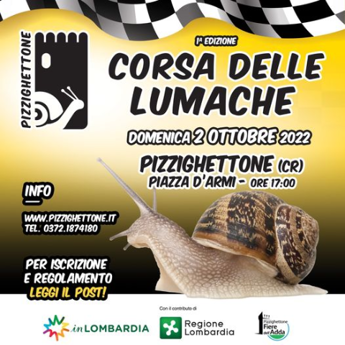 There is controversy over the ‘snail race’ scheduled for Sunday 2 October in Pizzighettone, in the province of Cremona. The event, during which 270 snails will compete along a one meter long track, is at the center of criticism from animal rights activists who, in addition to defining the event as a “bad antics”, have posted protest banners at various points in the past few hours. of the small town in the Cremona area. A position that gives rise to those who work there with snails. Like the Italian Heliculturists Confederation, whose members raise these gastropod molluscs strictly natural without using feed but only with salad, chard and cabbage. “This controversy makes us laugh a little – Giovanni Avagnina honorary president of Cie tells Adnkronos – because since the birth of our confederation we had never heard of problems between animal rights activists and snail races”. The confederation, which has about 10,000 operators within it, represents 30% of a market that invoices between 165 and 170 million euros every year in Italy. “Things like this – continues Avagnina – happen regularly. Animal rights activists also have problems. with shops that sell snails “. Avagnina stresses that “while breeding snails for food, we try as much as possible to do it with ‘cruelty free’ methods and without causing them any damage. Like all animals, they must be eaten, otherwise we throw them away. In our farms we have always sought, always following the indications of the Ministry of Health, to keep the snails as well as possible: that they have less trauma and problems of any kind “. The representative of the Italian helicopters concludes by saying that “the people who will attend the race will be able to do very little. Shouting at snails or – he jokes – ‘whipping’ them to make them go faster is totally useless: if they want to walk if they don’t want they don’t walk. molluscs that have minimal sensitivity since they do not have adequate anatomy to withstand damage. They plant more than they live “.” I believe that everything that has happened in the past few hours is out of place. The event we are trying to organize has paradoxically also the purpose of raising awareness of the issue of animal abuse “, says Mayor Luca Moggi. An exponent of the Centopercentoanimalisti-Nzt association sent a letter to the mayor and the police in which he announces his intention to report the alleged mistreatment reserved for snails. “This morning – continues the mayor – I personally replied to that person. The president of ‘Pizzighettone Fiera’ has already been to the carabinieri, even if we did not want to proceed with the complaint. I know that the person who wrote to us, of which for correctness I will not mention the name, he has already been convicted of defamation and for some things he wrote in the past on social media “. The mayor of Pizzighettone insists that the municipality he manages is absolutely ‘green’ and totally against any type of mistreatment of animals. “I invited everyone – he emphasizes – to see how the event takes place precisely because no harm is done to the snails during its development”. Moggi reiterates that in the recently updated municipal urban police regulation, the administration has decided to include articles concerning the protection of animals. “We are a reality immersed in natural reserves – he reiterates – like the Adda Park and the Adda Morta Park. So none of us want to organize an event on the backs of animals just to gain visibility”. Moggi concludes jokingly that he said “also a joke where I urged the animal rights association to take it out on the restaurant that is on the corner of the arcades in the center of Pizzighettone because in winter it offers a dish that has snails as an ingredient. “.

1 thought on “Pizzighettone, storm for the snail race”