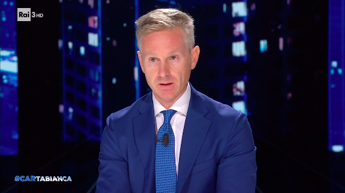 “We have to defeat the Zelensky taboo. It is not possible that in a free society one can only speak well of Zelensky. He is making very serious mistakes, we must make him understand that his attitude will lead to the destruction of Ukraine and probably of Europe. Faced with such a scenario, he should not say that he intends to liberate Crimea or ask for more weapons to be sent. If we do not begin to criticize Zelensky and understand that he does not know how to do his job as Head of State, we will not overcome the taboo that prevents us from having a serious debate ”. This is the position expressed by Alessandro Orsini, professor of international sociology of terrorism, in Cartabianca. In the context of the war between Ukraine and Russia, “Putin must build the scene in order to morally and legally justify the use of the atomic bomb. Italy is ready to face a situation of this type. The possibility that Putin uses the atomic bomb is very real, in my opinion it is high. Putin intends to recruit 300,000 soldiers, he will need time to train them. These soldiers in December or January 2023 will be ready to be thrown into the fray, we will have a horrible Christmas ”. “If there is no negotiation between the United States and Russia, it will be hell. Russia can potentially draw 25 million troops, Ukraine has a spare problem: Ukraine is done. It is a bankrupt, economically collapsed state, it has no weapons. The soldiers he has are those. My hope is that we can start negotiations with Putin soon ”, he continues.

1 thought on “Orsini: “Zelensky will destroy Ukraine, negotiation with Putin or terrible Christmas””