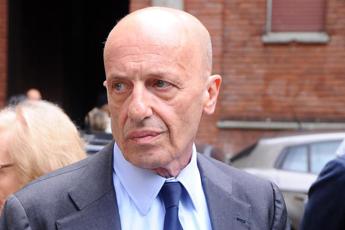 “Sometimes things are simpler than how they appear or how you would like them to appear. And this is my last day as editor of Il Giornale after twelve years of service.” Alessandro Sallusti writes this in a front page background in the ‘Giornale’ with which, after 12 years, he takes his leave as editor of the newspaper. “To try to explain it – writes Sallusti – I borrow a chapter from the latest novel by one of my favorite writers, Fabio Genovesi (‘The giant squid’, Feltrinelli edition) in which the author (who after his passion for writing has the one for cycling, so it is to be trusted) makes history revolve around the concept that ‘the greatest gift we can give ourselves, perhaps, is never to say’ now ‘”. “Here, when I have reached where I am – continues Sallusti – I could say ‘now I have arrived’, or ‘now I am old to try new adventures’. But also ‘now’ I have married into the family of Paolo Berlusconi and his daughter Alessia (my editori) which is an extremely welcoming, generous and freedom-loving family. Just as ‘by now’ I have been granted the privilege of speaking to President Silvio Berlusconi, that is to one of the two or three extraordinary men that our century has given us given and to which history, I am sure, will sooner or later recognize the merits in all fields. Here I could have lived peacefully by now, but one day, thanks also to a lucky meeting, another ‘by now’ he had the best: now, after twelve years, it was time to give up so many certainties and face new challenges, without rancor or particular calculations. “” I can only say that they were twelve fantastic years “is Sallusti’s balance sheet. , who observes: “Of course, no and while I was arrested for conspiracy, they put me two bypasses and two coronary stents, I experienced the worst publishing crisis ever and obviously a pinch of Coronavirus. But both your Journal and I are still here, and this is what matters. Together with my colleagues in this editorial office, I defended political and cultural freedoms that are perpetually under attack. I thank them all and wish them well. As for the publisher, well, every extra word might sound like a pimp or circumstance. I prefer to demonstrate in the future with facts the esteem I have gained towards them. ‘Now’ is done, a greeting to everyone, but especially to you readers. Thank you “, he concludes.

1 thought on “Sallusti, goodbye to the newspaper: “No hard feelings, now new challenges””