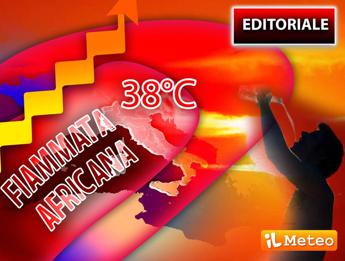 After the wave of storms that affected many areas of Northern Italy on Friday 29, from Saturday 30 the situation will return to being more stable, thanks to the increase in pressure. The winds will blow from the Mistral and for a few days they will be able to mitigate the temperatures so it will be hot, but without extremes. Read also Mattia Gussoni, meteorologist of the site www.iLMeteo.it, warns that this respite from the heat will have its days numbered: in fact, with the start of August the African anticyclone will advance for the umpteenth time in this crazy Summer. After a mostly sunny Monday and still not too hot temperatures, from Tuesday the invasion of hot air masses arriving directly from the Sahara desert will cause a significant increase in temperatures. The maximum values, day after day, will continue to rise inexorably until reaching again peaks close to 40 ° C such as in Milan, Bologna, Padua, Pavia, but also Florence, Rome, Terni and in the inland areas of Puglia, Sicily and Sardinia. The weather will stabilize and the days will pass under a scorching sun and a rare presence of clouds. The anticyclonic shield will leave some holes only on the northern part, where cooler and unstable currents could undermine it, managing to break through, with the risk of thunderstorms in particular in the second part of the week, especially over the Alps. In the north: last storms on the Triveneto, then sun everywhere. In the center: some showers on the Apennines, sun elsewhere. In the south: sunny and warm. Sunday 31. In the north: prevailing sun. In the center: possible showers on the lower Lazio. In the south: some rain in Campania and Cosenza. Monday 1st August. In the north: sun and warmer weather. In the center: all sun and heat. South: sunny, pleasant climate. From Tuesday it will be increasingly hot in all regions.

1 thought on “Hot, ready new African blaze on Italy: the start of a hot August”