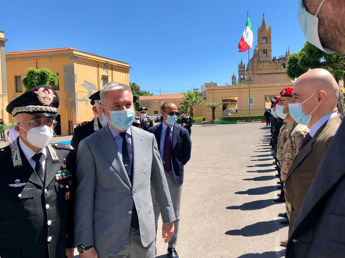 “The presence of the weapon in Sicily is widespread, evidenced by the 419 Stations and Tenenze which, if on the one hand they work in carrying out the traditional institutional tasks of proximity and control of the territory, on the other they also conduct complex and diversified operations on the territory, synergy with the other law enforcement agencies and the judiciary that I want to thank once again “. Thus the Minister of Defense, Lorenzo Guerini, on an institutional visit to Palermo where he went to the Sicily Legion, to the Uditore barracks, built in the former den of the boss Totò Riina and in the Zen barracks. Guerini, accompanied by the General Commander of the Carabinieri, General Teo Luzi, was welcomed by the Regional Commander of the Carabinieri Rosario Castello and by the Provincial Commander, General Arturo Guarino. “This is demonstrated by the important investigative activities that have allowed, even in a period inevitably conditioned by the health emergency, to continue to inflict harsh blows on the numerous criminal gangs present in the area – he says – I want to remember among the many, many anti-mafia activities carried out by the Arma here in Sicily, the very recent Operation conducted by the Carabinieri of the Provincial Command of Palermo in synergy with the Anti-Mafia Investigation Department which led, yesterday, to the execution of a precautionary custody order against 85 suspects held responsible for a long series of crimes, including mafia association, association aimed at drug trafficking, extortion and corruption “. “Sicily is a land of great economic resources, rich in a unique artistic heritage, important commercial centers and a rare cultural fervor, but – we know it well – it sees the presence of organized crime phenomena that damage and condition many aspects of coexistence civilization and the same economic and social development capacities of this land “, adds the minister. “Today – as we well know – the fight against criminal organizations is joined by an equally insidious and sneaky” enemy “, Covid-19, which in recent months has significantly weakened the social fabric and legal economy of this wonderful land – he adds – Also in this unprecedented context, the Carabinieri, together with the other Police Forces, has been able to ensure a concrete and adherent response to the needs of the population, keeping all its stations open and continuing to guarantee, without interruption , its peculiar service of territorial control, public order and social reassurance “. In the same way, in this phase of gradual restart, all the components of the Defense have continued and are continuing to do their part, in the tracing activities and in the administration of vaccines with its own specialized personnel, as well as in ensuring the necessary support to civil health structures i of the territory. Women and men of the Arma, I am sure that you will continue to carry out your mission with the utmost determination, committing every energy to the protection of citizens and the safeguarding of institutions, always favoring the reasons for duty, in adherence to the bicentennial values ​​of the Meritorious ” . “The same reasons that, over forty years ago, prompted General Carlo Alberto Dalla Chiesa, to whom this historic barracks is named, to fight to the utmost sacrifice, to give hope to all honest Sicilians – he continues – The Italians are grateful to you for what you do every day for the safety of our communities; for the seriousness that you transmit, for the spirit of sacrifice that you know how to express, even when a commitment is asked of you that often goes beyond your duties. Always know how to deserve the trust and affection of the people entrusted to you. I, with pride, will be at your side to support your action. To all of you, I renew my gratitude first of all as a citizen and then as a Man of the Institutions, for the dedication and daily commitment you show in your mission at the service of the Institutions and the country “.

1 thought on “Guerini in Palermo: “From the Carabinieri harsh blows to the mafia””