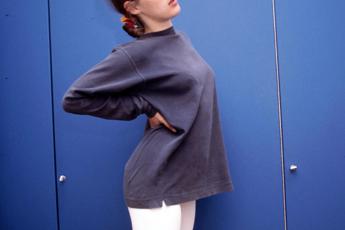 Over 40,000 people, according to the National Association of Rheumatic Patients, in Italy have to deal with ankylosing spondylitis, a chronic inflammatory disease which, if not treated properly, could lead to a progressive reduction in the ability to move the spine, up to the point of conformation of the so-called “bamboo cane”. It appears with a pain that is concentrated in the lumbar area, up to radiate the pelvis and buttocks, persisting for at least three months. A non-acute pain that arises and worsens with rest, even at night, while improving with movement and exercise. Therefore, not the classic mechanical back pain, with which it has little in common. This is what is reported in an article published by Aleati per la Salute (www.alleatiperlasalute.it), the portal dedicated to medical-scientific information created by Novartis. Unlike back pain, which occurs at any age and whose pain is most often associated with injury or tearing that improves at rest, ankylosing spondylitis begins at a young age, particularly in males. and it tends to have a very slow evolution. It is not a frequent pathology (it involves less than 1% of the population) but its symptoms are disabling. In the more advanced stages, the inflammatory process can go up along the spine and also affect the dorsal and cervical region, with a tendency in the more advanced stages to vertebral ankylosis. In this case there is an impairment of the normal curvature of the spine with a tendency to hump. This conformation, frequently observed in the elderly, should immediately lead the physician to the diagnostic suspicion of ankylosing spondylitis when it is found at a young age. It is clear that in these conditions the patient may have difficulty in carrying out many activities of daily life, such as driving the car or staying seated for a long time. As if that were not enough, sometimes the patient is forced to deal with other disorders: episodes of inflammation of the Achilles tendon, pain in the heel and / or in the plantar region, eye inflammation with pain, redness and hypersensitivity to light. (uveitis). Although there are effective treatments – reads the article – the problem of the disease is the delay with which it is diagnosed. According to a survey conducted by Anmar Onlus (National Association of Rheumatic Patients), 60% of patients had to wait more than three years from the appearance of the first evident symptoms before being diagnosed, only 29% claim to have a good quality of life and eight out of ten say they feel a sense of loss and the need to talk to someone about their discomfort even through the web. “But for a diagnosis of ankylosing spondylitis – says Silvia Tonolo, president of Anmar – there are patients who wait even 7-8 years. And without an early diagnosis it is impossible to put the disease on standby.” To date, there are excellent treatments to stop the progression of the disease and control its symptoms. The priority objectives in the therapeutic management of the disease are the alleviation of pain and stiffness to restore and maintain correct posture and excellent joint mobility. But to ensure better living conditions for patients must favor timely therapeutic interventions. Therefore, the role of the general practitioner becomes fundamental, consulted upon the appearance of the initial symptoms in 45% of cases, in directing the patient to the most appropriate specialist for the pathology: the rheumatologist. lifestyle habits play a central role in the pathology, potentially able to positively influence health status, such as a balanced diet, restful sleep, and psychological support from family and friends. Equally fundamental is the importance of targeted physical activity in ankylosing spondylitis, which if carried out daily, helps to maintain correct posture, helps to improve joint excursion and has an analgesic action. However, it is necessary to be guided, especially at the beginning, by the physiatrist and physiotherapist in order to obtain the maximum benefit. The complete article is available on: https://www.alleatiperlasalute.it/diagnosi/spondilite-anchilosante-non-un-semplice-mal-di-schiena.

Diver who died while diving in Lake Garda

Consult, Courage: “sentence 37-2021 is a compass in the management of the pandemic”

One thought on “Ankylosing spondylitis, in 40 thousand with ‘bamboo cane’ column”