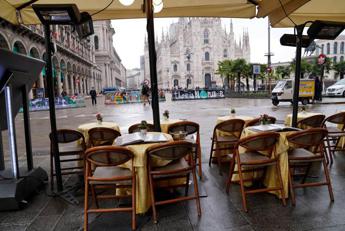 Less rigid anti-Coronavirus measures and rules in almost all of Italy where, from Monday 10 May, no region will be in the red zone. Sicily, Sardinia and Valle d’Aosta will be in orange, while all the other regions – from Lombardy to Lazio, from Veneto to Campania – will be in the yellow zone with free travel and restaurants open for lunch and dinner outdoors. The curfew is still in force everywhere, from 10pm to 5pm. TRAVEL – As for travel, in the yellow zone, they are free. You don’t even need self-certification to switch from one yellow region to another. The rules for private visits have changed until June 15 in the yellow regions. Four people can reach another private home, who will be able to bring with them minor children, even older than 14 years. These movements can also take place between different yellow regions and it does not matter if the journey involves crossing an orange or red region. In the orange zone, you can leave the municipality, if it has up to 5,000 inhabitants, and move 30 km without going to a capital. Private visits can take place within the limits of the municipality. Instead, they are prohibited in the red zone. Yes to access to second homes, even if they are in the orange or red zone, but only if you do not live and if you move only in the company of the cohabiting family. The movement, including those who return to their residence, does not require vaccination or recovery certificates and swabs. BARS AND RESTAURANTS: THE DIFFERENCES BETWEEN ZONES – In the yellow zone, new reopening criteria for bars and restaurants that will be able to accommodate customers for lunch and dinner as long as they are outdoors. You can only sit at the table, maximum four people, unless they are cohabitants. The distance is fixed at one meter. From 1 June, only in the yellow zone, the restaurants will be open even indoors from 5 to 18. You can only sit at the table, maximum four people, unless they are cohabitants. The ministry’s circular to the prefects clarified some rules for bars. Service at the outdoor tables and even at the counter is allowed only “in the presence of structures that allow outdoor consumption”. Otherwise, only table service and takeaway, allowed until 6pm. You must remain in the bars as long as strictly necessary. In the orange and red zone, however, bars and restaurants are closed. The take-away of food and drinks remains allowed until 6 pm from bars and until 10 pm from wine bars, wineries and restaurants. Home delivery of food and drinks is always allowed. SCHOOL – “From April 26 and until the end of the school year people go back to class even in high schools (upper secondary schools). Attendance is guaranteed in the red zone from 50% to 75%. In the yellow and orange zone from 70 % 100% “according to what Palazzo Chigi has announced. As for the university, “from 26 April to 31 July in the yellow and orange areas the activities take place primarily in presence. In the red areas it is recommended to favor in particular the presence of first year students”. SPORTS, GYM AND POOLS: HOW IT WORKS – Gyms and swimming pools remain closed. “From April 26, 2021, in the yellow zone, in compliance with the guidelines in force, it is allowed to carry out any sporting activity outdoors, including team and contact activities. In addition, from May 15, 2021, always in the yellow zone, the activities of the outdoor swimming pools and, from 1 June, those of the gyms “reads the note from Palazzo Chigi. In the orange zone it is allowed to carry out outdoor sports or motor activities, even in equipped areas and public parks, provided that in any case respecting the interpersonal safety distance of at least 2 meters for sports activities, unless the presence of a companion for minors or for people who are not completely self-sufficient. It is allowed to go to public and private sports centers and clubs in one’s own municipality or, in the absence of such structures, to neighboring municipalities, to carry out basic sports activities exclusively outdoors. The use of internal changing rooms in clubs is prohibited. In the red zone, basic sports activities and physical activity in general are suspended in public and private sports centers and clubs, both outdoors and indoors. Contact sports prohibited. In the red zone, yes to walking near your home and individual sporting activities (running, cycling). CINEMAS AND THEATERS: WHERE THEY ARE OPEN AND WHERE CLOSED – From 26 April cinemas, theaters, concert halls, live clubs will reopen to the public in the yellow zone. There must be pre-assigned seating and a distance of one meter from each other. The maximum capacity allowed is 50% of the maximum authorized and in any case not exceeding 500 spectators indoors and 1000 outdoors, announced Palazzo Chigi. In relation to the epidemiological trend and the characteristics of the sites, it will be possible to authorize the presence of a greater number of spectators outdoors, in compliance with the indications of the CTS and the guidelines.