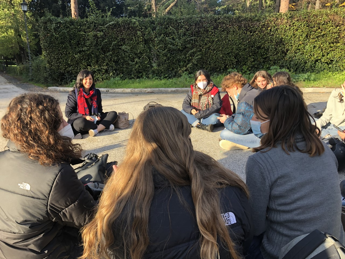 “Avoid the occupations, the Government has come to see you, I am here. I am here so that your occupation, which I do not share, as regards the issues, reaches the Government”. Thus the Undersecretary for Education Barbara Floridia made her debut by addressing a representation of Roman students gathered in Villa Borghese in the first of a long series of meetings that will take place throughout Italy, baptized by the Undersecretary and the boys at the conclusion of the exchange “assemblies of the future “. Informal moments that will take place in parallel with the institutional activities of the student councils that “I will urge them to be listened to more often”. In a long informal conversation, seated on the ground in the Roman villa, the Undersecretary listened and told the students what the Government is doing, starting with the establishment of the ‘green community’, “a set of experts who made themselves available of schools to support teachers in the Regeneration plan and which I am reopening due to the numerous requests from other experts to be part of it “, he announced. “Why not also involve university students in the community on new topics, such as the energy transition”, the youngsters asked, presenting a complex project that would benefit, if implemented, high school students in terms of orientation; of university students on formative credits and of tenured teachers “not always up to date on new topics”. A proposal welcomed with interest by the undersecretary who affirmed also as regards the fields of study: “they are outdated, but they can be improved. Let’s do it together”. Likewise on the teaching of history in which according to the children “the last 70 years are seriously uncovered”, “let’s think together”, said Floridia. “We want a school suitable for students, not unglued from the times. the crosswords of learning intersect more quickly to make sense. We are not interested in training ourselves in the world of work but in our individuality, in a different, non-frontal teaching “, a representative of the Righi school intervened. “But teachers and principals don’t listen to us”, one girl timidly commented. “Educational approaches must be innovated through training and integration with experts – replied the undersecretary – It was always cut on the school, it was the ATM. I entered politics because I did not see investments where critical thinking is formed. Now I’m here with you “, he concluded. (by Roberta Lanzara)

1 thought on “School, the ‘assemblies of the future’ government-students are underway, moments parallel to consultative activities”