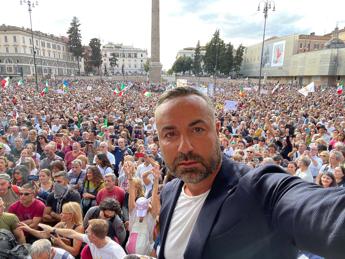 Eighteen days in prison in Poggioreale, of which the first seven were spent in a 25 square meter cell together with the Roman leader of Forza Nuova Giuliano Castellino. “Today I don’t feel better for the experience of detention, I just learned about the world of prison, between enormous limitations, substantial inactivity, inedible food. I went from drinking Prosecco in the evening at dinner to quenching my thirst with water of the bidet the next day … “. Speaking to the Adnkronos is Biagio Passaro, a leading exponent of the IoApro movement, locked up in prison together with Roberto Fiore and Giuliano Castellino for the assault on the CGIL in Rome on 9 October last and set free because he was recognized by the investigators as unrelated to the facts . “Actually, at the expense of Passaro – reads the reasons for his release – there is essentially the video he himself posted on the Facebook page of IoApro, which documents his entire journey inside the CGIL headquarters, where he enters after the door it has already been broken through, without carrying out acts of damage and indeed exhorting those present with phrases such as ‘no, don’t break guys, don’t break’ “. “I, a decent person, with a clean record, at the head of a chain of restaurants (throughout Emilia-Romagna and two in the United States), was unjustly thrown in prison – says Passaro – and today was also recognized by the investigators . It was a very bad experience and I will fight to raise awareness of the real problems of the detainees and make sure they can be better people once they are free. “” I served an unfair ‘sentence’ just for shooting a video. Today. my lawyer Nicola Trisciuoglio is trying to get me to cancel the daspo, then I will go ahead with my movement and eventually we will appeal to the Supreme Court to cancel the provision. In the meantime, I continue with my job as a restaurateur, despite the difficulties of Covid and the green pass “. But going back what would he do? “In hindsight we are all good, surely I would go to the demonstration – he says – but I would not enter the CGIL with my mobile phone: I never, ever thought that it would cost 18 days in prison. Then this devastation is to be seen: 23 thousand euros of damage hardly lends itself to the hypothesis of looting. I hope the truth of the facts will be discovered, but above all how it was possible to have me do 18 days in jail when the images already spoke clearly for themselves “. (by Silvia Mancinelli)

1 thought on “The leader of IoApro Passaro: “I unjustly arrested, today I would not return to the CGIL””