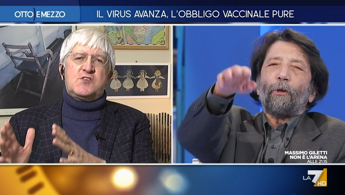 Massimo Cacciari show tonight at Otto e Mezzo on La7, with yet another question and answer in the philosopher’s studio. This time Alessandro De Angelis and Beppe Severgnini end up in the professor’s sights. Cacciari explains in the studio: “The bad news is that infections are growing even among the vaccinated” therefore “the vaccine does not protect in the complete world” and “we must also think of something different” because, if the vaccination were to take place every 6 months, at that point it would be “a therapy like that of the flu vaccine, which however no one has ever dreamed of making mandatory”. “At this point – he adds -, since they have also decided to vaccinate infants, then yes: obligation, obligation, obligation. This is how they take responsibility”. After the words of the professor Severgnini intervenes: “I feel great sadness when I hear a person like Cacciari, after all the deaths, still make a comparison between covid and flu. You must say that without vaccines it would be a catastrophe, this is not the time to confuse people’s ideas. “” Attention Prof Cacciari to give misleading data – De Angelis adds to the dose -. I say two: in Lazio in 2020 1,155 people died in a month, this year 188 “while” 49.1% of hospitalizations and 64.2 of admissions to intensive care took place among those who did not receive any vaccines “. “Did I say the vaccine doesn’t work?”, Replies Cacciari. “Well basically …”, says De Angelis who gets a piqued reply: “Let’s stay calm, come on … I just said that we need to think about a plan B because this vaccine doesn’t work as we hoped and doesn’t solve the problems”. Then, after a new question and answer with Severgnini on vaccines and scientists cited by the prof, Cacciari blurts out. The Corsera journalist says: “The serious professors are the ones who answer questions. You are a philosopher, I am a journalist, you look at the publications …”. “I understand – he loses his temper -, the scientists are only his and the others are poor stoned! But come on, you gave Montagnier a stoned … So I’m silent and I don’t talk about this topic anymore, but what a speech it is ? “. “Because they are real scientists ….”, Severgnini tries to continue. “But he’s crazy! Look – threatens Cacciari – you get a complaint saying that those who will be in Turin with me are not real scientists! But be careful, what are you saying?” The new intervention by De Angelis – “I do not know if you consider as true scientists those who have exposed denial theses or if you consider true the scientists who have compared this situation to the advent of Nazism …” – for Cacciari it is the straw that makes to overflow the camel’s back: “What a provocation – he says turning to Lilli Gruber -. Look, I’m going away, if this continues like this and he says I’m with those dressed as deportees I’m going. If you make such shitty provocations – he then turns to De Angelis – I’m leaving! “.

One thought on “Green pass and vaccines, Cacciari blurts out to Otto e Mezzo: “Provocations of mer ..””