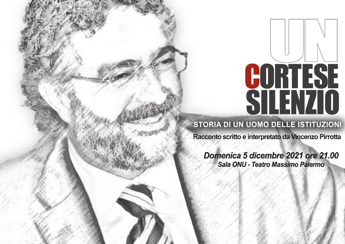 “A courteous silence. Story of a Man of the Institutions ”is the title of the theatrical story by the director and actor Vincenzo Pirrotta which will be staged on Sunday 5 December, at 9 pm, in the UN hall of the Teatro Massimo in Palermo. The initiative is promoted by the “Libera” Association and shared by local associations such as “Parco Libero”, “Cassaro Alto” “Addio Pizzo”. The theatrical work, characterized by the rhapsodic rhythms linked to the tradition of the “Cunto”, traces the professional life of Renato Cortese, a thoroughbred investigator of the State Police and, most recently, Police Chief of Palermo, unraveling the investigative successes related to the capture of dangerous mafia fugitives such as the head of Cosa Nostra Bernardo Provenzano up to the investigation of a well-known Kazakh fugitive. The latter affair, which ended with the expulsion of the wanted man’s wife and daughter, resulted in the opening of a criminal case currently pending at the Court of Appeal of Perugia. The text by Vincenzo Pirrotta outlines the path of Renato Cortese’s professional life with a dry style, free of digressions, leaving the viewer the possibility of maturing an independent judgment on the whole affair without preconceived theses. The story of Renato Cortese “photographed” by Vincenzo Pirrotta stimulates profound reflections, thanks to the words of Leonardo Sciascia borrowed from the same author. “As paradoxical as it may seem, the choice of the profession of judging should consist in accessing judging as a painful necessity, in assuming judging as a continuous sacrifice to anxiety, to doubt”. In this context of sensitive testimony from civil society, the theatrical initiative shared by Libera “expresses the affection and esteem towards a representative of the institutions by many exponents of the world of culture, entertainment and associations who wanted to gather around the Man and the Policeman to say “I’m with Renato Cortese”.

1 thought on “‘A Cortese Silence’, a theatrical story in Palermo”