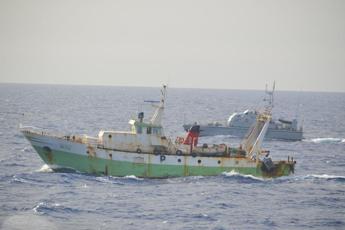 The fishing boat ‘Aliseo’, hit last Thursday by a Libyan Coast Guard patrol boat, arrived in the port of Mazara del Vallo (Trapani). On board are the seven crewmen including the commander Giuseppe Giacalone, who was slightly injured by gunshots fired by a Libyan military patrol boat. Read also The fishing boat is escorted by a Coast Guard patrol boat. The boat is docking at the very moment where family members are waiting for them. Also present was the mayor of Mazara Salvatore Quinci.
The assault took place 35 miles north of the coast of Al Khums, “within the fishing protection zone in the waters of the Tripolitan province”, as announced Thursday by the Navy intervening on the spot with the Libeccio frigate. Yesterday the Foreign Minister Luigi D Maio defined that stretch of sea “at risk”. The Commander was slightly injured in the head by some splinters of the glass of the cabin and treated on board by the Italian military. Yesterday, his son Alessandro, who spoke to his father via radio, said that the fishermen on the fishing boat “were chased for two hours” and that “the patrol boat was fired at eye level”. An investigation will establish the dynamics of what happened off the Libyan coast during the boarding of the Libyan Coast Guard. There are some images that were shot by the Italian Navy. His son Alessandro and other fishermen from the Marineria di Mazara have already arrived on the dock of the port of Mazara.