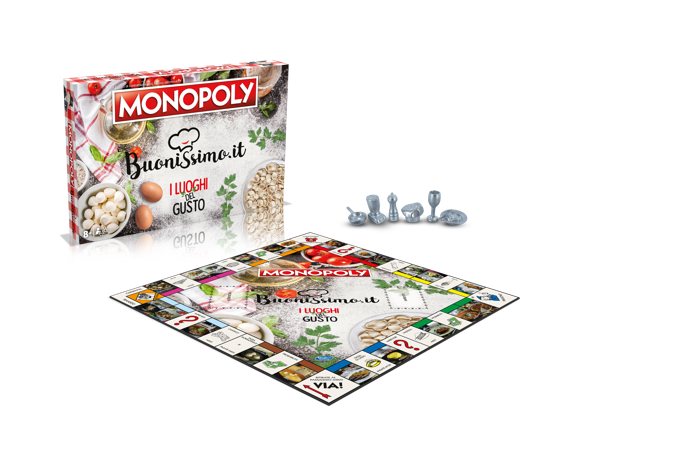 The most famous boxed game in the world, Monopoly, has won over 1 billion players in 114 countries around the world since 1935. Monopoly represents a pop icon for all game lovers, and not only, and has contaminated many areas, from cinema to fashion and design. Today, more than 85 years after its birth, it is transformed into a real gastronomic journey, to discover the recipes that have made Italian cuisine famous all over the world. The special and limited edition of “Monopoly Buonissimo”, exclusively in all the toys centers in Italy, is the result of the partnership between Winning Moves, a leading company in the world of board games, cards and puzzles, and Buonissimo.it, the vertical portal of Italiaonline dedicated to cooking and healthy eating, with over 10,000 recipes and video recipes, explained step by step. The board of “Monopoly Buonissimo” thus takes on all the appearance of a set table. Parco della Vittoria and Viale dei Giardini give way to a braised meat in Barolo and the great classic of the Milanese city, the Milanese risotto; while Vicolo Corto becomes as streamlined as the Valdostan polenta concia. And if the North, South, West and East stations make room for desserts, from cantucci to cannoli, the Electric Company and that of Drinking Water are replaced by two icons of Mediterranean cuisine: pizza and ice cream.But the real challenge for the diners is to get in the kitchen and make all the dishes on the board: just frame the QR Code on each property card and follow the video recipes step by step. Only in this way, by collecting cards of the same color, players will be able to create a complete menu and continue their climb to victory. For the more ambitious then, the next step will be to open a tavern and immediately after a restaurant, becoming the most renowned starred chefs in Italy.