25 November, ISMA: 50 scholarships for orphans victims of femicide and 1522 campaign 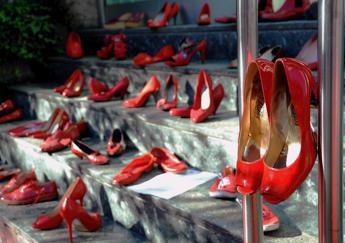 50 scholarships dedicated to femicide orphans and a communication campaign to raise awareness of the use of the anti-violence and stalking number 1522 aimed at tenants of ISMA-owned properties: these are the actions that the ASP ISMA – Istituti di Santa Maria in Aquiro presented today 25 November on the occasion of the International Day for the Elimination of Violence Against Women. In the presence of the president of the ISMA Enrico Gasbarra and the directors of the Board of Directors, the regional councilor Michela Di Biase, and the representatives of the associations “Il Giardino Segreto” and “Con i Bambini” that deal with the recovery and support of orphans of femicide, the guidelines of a new annual call were presented to support, with scholarships of up to 1000 euros, girls and boys of middle and high schools belonging to families upset by episodes of femicide. of femicide with an educational dowry is, for ISMA, a social priority: for these children, the very idea of ​​family is broken, as in a single event both the father and the mother disappear, without the possibility of recovery, at least immediately, of adequate parental relationships. Together with the new call, ISMA promoted the communication and awareness campaign “Woman, and not alone”: in the 15 residential properties of p property of the Company, information points have been set up to promote the anti-violence and stalking number 1522 promoted by the Equal Opportunities Department of the Presidency of the Council of Ministers. reported by the Ministry of the Interior: of the 109 women killed since January 1, 2021, as many as 93 were killed in the “family / emotional” context and in particular 63 died at the hands of partners or former partners. homes can represent one more tool to save a woman and her children. “ISMA – declared its President Enrico Gasbarra – has chosen to participate in this day with an absolutely concrete and lasting commitment: in agreement with the Lazio Region we have decided to support orphans of femicide with dedicated scholarships for junior high school children higher and higher. Nobody will be able to restore to these guys, in the short term, the serenity lost due to this unbearable phenomenon. But supporting them also with these tools is a duty of the whole community. “” I thank ISMA for an extraordinary sensitivity – commented the regional councilor Michela Di Biase – and which has implemented two extraordinary initiatives: to allocate an economic dowry for the boys orphans of femicide means supporting them and being at the side, very often, of their grandparents. Just as the spreading of the anti-violence number 1522 in the residential properties owned by ISMA is a sign of attention and closeness to all women. These two initiatives that will remain permanent are the most tangible sign of the commitment of the Lazio Region and ISMA towards the most extreme vulnerabilities.

CSM, appeal of the currents to Cartabia: “Strategic and urgent reform ‘

One thought on “25 November, ISMA: 50 scholarships for orphans victims of femicide and 1522 campaign”