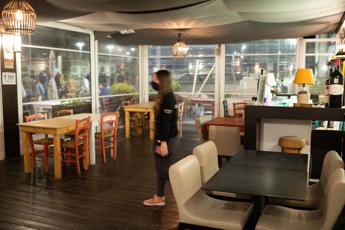 Super green pass in Italy also in the white area. The rules for no vax are taking shape today and will be included in a decree: the unvaccinated, probably starting from 6 November, will not be able to access restaurants, gyms, cinemas, theaters, bars, stadiums, discos and even hotels, as established from the control room which met in view of the Council of Ministers. The negative swab remains sufficient to get to work. The squeeze is also triggered in the white area, so not only where infections rise and situations in hospitals are more critical – that is, from the yellow area to rise – but everywhere and without distinction of any kind. “All activities remain open, even if the red zone is triggered. There will be lockdowns only for the no vax”, one of the ministers present at the control room told Adnkronos. The division by colors – white, yellow, orange and red – with the new sizes would remain but in fact becomes more bland. However, there is a strong division among the majority forces on possible closures to be adopted in the red zone. In particular, sources present at the control room report to Adnkronos, Lega and Fi would have to keep everything open, including bars and restaurants, even in the most critical areas, triggering the lockdown only for no vax. On the contrary, the other majority forces would be in favor of providing for generalized closures in the event of more critical situations, that is red due to the incidence of the virus and due to hospital systems in trouble. The knot will be dissolved in the Council of Ministers. The color system remains tied to even more incisive straits at the local level, where the incidence of the virus and the hospital situation require it. Local administrators should be put in a position to be able to decide even limited lockdowns, at a territorial level. In any case, the final word will be up to the CDM.