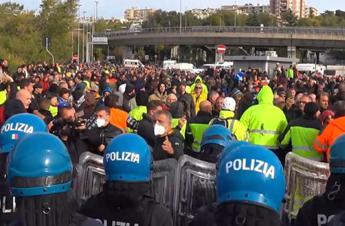 After the boom in coronavirus infections, Trieste is preparing to launch measures and rules to limit the events such as those of the no Green pass that have been staged in recent weeks: Piazza Unità d’Italia, the heart of the city, will be closed to the demonstrations of protest until December 31st. “The right to health is a primary good” and “prevails in the balance of interests” over the right to demonstrate, says prefect Valerio Valenti in the press conference broadcast on social channels. “The right to expression must not be repressed, but it must be compressed, limited and conditioned in the light of the scientific evidence we have recorded. It is not an easy operation. The trend of the infection is linked to the most recent events, such as parades and demonstrations that have been repeated in recent weeks in Trieste. We will meet as the provincial committee of public order and safety, I am going to sign the provision according to which Piazza Unità d’Italia cannot be the scene of protests until December 31 “, says the prefect, planning the launch of a ordinance of the mayor and adding an appeal: “You are free not to get vaccinated, but let the others live”. Read also “I grew up respecting the Constitution and democracy, what we have seen in recent weeks has touched the image of the city as serious and respectful of the laws. The mayor is responsible for the health of the citizens. Piazza Unità is off limits for everyone: whoever goes to demonstrate will be punished with important fines ”, said Mayor Roberto Dipiazza. “I will ask the committee that masks be made compulsory even outdoors. We are close to the yellow zone, if we go back to closing it would be truly a disaster. It is not tolerable that few people bring the city to its knees, in terms of image and as regards infections. I never thought I’d see the scenes I saw in Piazza Unità, with bivouacs and people sleeping: what happened could only happen, the infection spread like wildfire. From today, until we return to normal, maximum hardness. The Constitution provides that it can manifest itself, but problems cannot be created for the city and citizens ”, he adds.