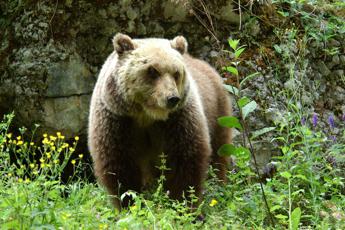 “A bear went up to the balcony, my husband threw himself downstairs.” In Pescosolido, in the province of Frosinone, two people were ‘besieged’ by a bear who climbed up to the balcony on the first floor. The misadventure is told in a signed letter, published on the Facebook group ‘Sei di Pescosolido se’. A lady tells the story: her husband, hunted by the animal, threw himself from a height of about 6 meters. “My husband and I had a close encounter with the bear. A vis à vis less than a meter away, we separated the railing of the terrace. Hearing noises coming from the terrace of the bedroom on the first, unwary, unconscious thinking about some malicious person, we went out with the lights of the mobile phones, I practically screamed in the bear’s face: who is there and in response the bear snarled in my face trying to reach me with a paw, in the weak light of the mobile phone I was able to count all the teeth in his mouth plus the red tongue, with a jump back I returned from the French window at a distance of 4 meters, my husband who was in the corner to my right seeing himself hunted because in the meantime the the bear had climbed over, he was forced to jump down. Fortunately 3 meters from the low side because on the other side there are 6. The fall was really bad he has pains everywhere especially in the hip and pelvis and bruises on everything the right side. Perhaps from the intervention of 118 “, writes the lady, explaining that tests will be carried out in the hospital.” The bear is certainly scared as it is perhaps more than us in the corner and in the dark he threw a couple of blows, one of which hit the old woman parable that probably spared my husband, the others empty because he was already downstairs and dragging himself with great willpower he came back from the kitchen where I ran down to go and open the door. The frightened bear probably ran away from where it came from “, he adds.” We requested the intervention of the carabinieri who came from Casalvieri and I thank them but the fear was great and we thank God for how things went. The bear in the escape left feces on the terrace. We ask our fellow pescosolidani to be careful at night because he probably chose Pescosolido for a night tour and it is not said that he will not return. But above all, we hope that those in charge will make a way for the bear to return to its natural habitat without and before it is harmed “, concludes the lady.

1 thought on ““A bear went up to the balcony, my husband jumped””