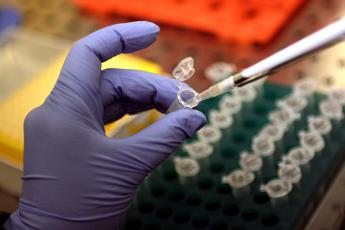 In patients with the most common form of lung cancer, non-small cell lung cancer, a dual immunotherapy based on nivolumab plus ipilimumab, combined with limited courses of chemotherapy (2 instead of the classic 4), reduces the risk of death by 28% and a 33% risk of disease progression. In addition, 38% of patients who received dual immuno-oncology therapy in combination with 2 courses of chemotherapy were also alive at 2 years compared to 26% of those treated with chemo alone. These are the main data of the phase 3 study CheckMate -9LA, presented today by Bristol Myers Squibb (Bms) in an oral session of the Congress of the American Society of Clinical Oncology (ASCO), running until June 8 in virtual form. “In 2020, almost 41 thousand new diagnoses of lung cancer were estimated in Italy – says Cesare Gridelli, director of the Onco-Hematology Department of the Moscati hospital in Avellino – It is a particularly difficult neoplasm to treat, because about 70% of cases is discovered at an advanced stage. And the 5-year survival for people with metastatic non-small cell lung cancer does not exceed 6%. Hence the importance of new therapeutic options “. “The CheckMate -9LA study involved more than 700 patients and has an innovative design – underlines the specialist – First of all, the combination of 2 immuno-oncological molecules, nivolumab and ipilimumab, allows to obtain a complete and synergistic mechanism of action, because it is direct towards 2 different checkpoints (Pd-1 and Ctla-4). The further advantage of this therapeutic scheme is represented by the use of limited courses of chemotherapy, which allows to reduce side effects. This is a great benefit for patients , also from a psychological point of view, because chemotherapy is still scary. The patient, in less than a month, ends chemotherapy and continues treatment with immunotherapy “.” The dual immuno-oncological therapy consisting of nivolumab plus ipilimumab , in association with 2 cycles of chemotherapy, at the forefront of metastatic cancer – continues Gridelli – has shown improvements in both overall and pr disease progression. Notably, at an extended 2-year follow-up, the combination continued to show sustained improvement in overall survival compared to chemotherapy alone, with a median of 15.8 months versus 11 months. Duration of response also reached 13 months, compared with 5.6 months with chemotherapy alone. And these benefits were maintained regardless of the level of Pd-L1 expression and histotype, scaly or non-scaly. “Just today Asco awards Gridelli with the ‘BJ Kennedy Award for Scientific Exellence in Geriatric Oncology’, a prestigious recognition that certifies the decisive contribution in the research, diagnosis and treatment of cancer in the elderly. The oncologist – reads a note – dedicates his reading to the management of advanced non-small cell lung cancer in the elderly patient. The value of scientific production of Gridelli is testified by a very high parameter, which is based on the number of publications and citations received (H-index equal to 69).