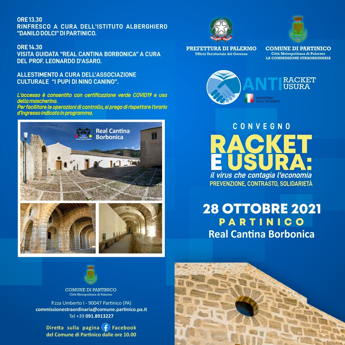 With the collaboration of the Prefecture of Palermo, the conference ‘Racket and usury: the virus that infects the economy will be held tomorrow at the Real Cantina Borbonica in Partinico (Palermo). Prevention, contrast, solidarity ‘. After the institutional greetings and the intervention of the legal representatives of the anti-racket and anti-usury Associations registered in the prefectural register of the Prefecture of Palermo, the reports will be held by the Deputy Prosecutor at the Court of Palermo, Federica La Chioma, by the archbishop of Monreale, also in the as a member of the working group on excommunication against the mafias at the Vatican, Monsignor Michele Pennisi, and by the Deputy Prosecutor of DNA, Francesco Del Bene. The Municipality of Partinico was dissolved a year ago for mafia and is governed by an extraordinary prefectural commission. The work of the conference, moderated by the journalist Elvira Terranova, will be concluded by the extraordinary Commissioner of the Government for the coordination of anti-racket and anti-usury initiatives, Prefect Giovanna Cagliostro. “The occasion will allow to give all the economic and social components of the Partinico area the opportunity to get to know directly, through the in-depth analysis and testimonies that will emerge from the conference, the institutional network supporting all those who, also due to pandemic, come into contact with the sad phenomenon of extortion or usury, in turn “virus that infects the economy”, says the Extraordinary Commission composed of Concetta Caruso, Maria Baratta and Isabella Giusto. “The goal is that to convey the awareness of being able to count on a very specific antibody, the State and the entire support network, present both in the prevention phase, with the anti-usury Associations and Foundations, and in the phase of contrast with the Judiciary and the Forces of Order, both in the solidarity phase, with the instruments, provided by the Ministry of the Interior, of access to the Solidarity Fund managed by the Solidarity Committee for the victims of extortion and usury chaired by the government’s Extraordinary Commissioner for the coordination of anti-racket and anti-usury initiatives “, say the three extraordinary commissioners.

One thought on “Racket and wear, tomorrow conference in Partinico”