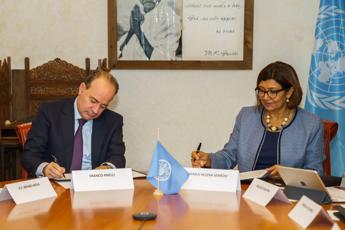 The Food and Agriculture Organization of the United Nations (FAO), and the Strategic Alliance of Catholic Research Universities (Sacru) have signed a bilateral collaboration agreement aimed at combating food and health inequalities on the planet. The signing of the ‘letter of intent’ took place on the occasion of the ‘Enhancing resilience of food systems to promote food security’ event, promoted by the two institutions, yesterday in Rome, at the FAO headquarters. The agreement was signed by the Deputy Director General of FAO, Maria Helena Semedo, and by the Vice President of Sacru, Franco Anelli, Rector of the Catholic University which hosts the Secretariat of the Alliance of Catholic Universities. The agreement encompasses an integral and sustainable health approach, which aims to reduce malnutrition and works to achieve important One Health results: the protection of human, animal, plant and ecosystem health. Antimicrobial resistance, food security and endemic zoonoses, such as rabies, are other areas of concern to be addressed holistically through ‘One Health’. This requires a solid analysis of the agri-food systems.The letter of intent between FAO and Sacru – reports a note – was born with the hope of facilitating the achievement of the Sustainable Development Goals 2, 3 and 10i of the UN Agenda 2030 (Zero hunger, Health and well-being, Reduction of inequalities) and is part of the direction recently undertaken by the international community. Starting from the focus of the new One Health Priority Program of the FAO, on 17 October the new Joint Action Plan One Health was launched by the Quadripartito – FAO, United Nations Environment Program (Unep), World Health Organization ( WHO) and World Organization for Animal Health (Woah). The document emphasizes the importance of a multisectoral synergy between multiple stakeholders, of which the collaboration between FAO and Sacru serves as a concrete example. FAO leads the action of the United Nations to protect the food supply chain and prevent contaminated food diseases, which affect 600 million people worldwide every year. Sacru is a network made up of eight Catholic universities present on four continents (Australian Catholic University, Boston College, Universitat Ramon Llull, Pontificia Universidad Católica de Chile, Pontifícia Universidade Católica do Rio de Janeiro, Sophia University, Universidade Catolica Portuguesa, Catholic University of the Sacred Cuore) who cooperate with the goal of promoting global education for the common good and excellent interdisciplinary research. Fao and Sacru will deepen the collaboration on Global Food Safety and the One Health approach, seeking in particular to integrate different skills to develop capacities in food safety, nutrition and sustainable and resilient food systems at national and regional level, and to increase the awareness of One Health’s good policies, identifying successful case studies and sharing best practices. In this sense, particular attention will be paid to developing countries. The Fao Deputy Director General, Maurizio Martina, the Permanent Representative of Italy to the FAO, Ambassador Bruno Archi, the Vice Rector of the Catholic University and Secretary General of Sacru, Pier Sandro Cocconcelli, also took part in the signing ceremony of the agreement. gave a report on “Food Safety: Emerging Risks from One-Health Perspectives”, and Senior One-Health Officer and Lead for Amr in Fao, Junxia Song, spoke on the topic “Promoting One-Health to improve food production and address the problem of antimicrobial resistance “. A larger delegation made up of students, doctoral students and professors from the eight Sacru universities attended the event via remote connection.