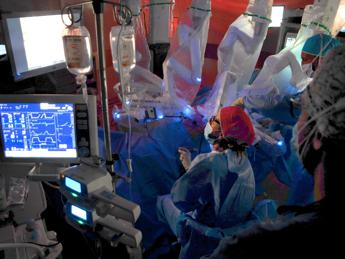 A ‘crazy heart’ which at rest exceeds 100 beats per minute and which accelerates even more, suddenly, at the slightest physical effort. It is Tsi, a form of tachycardia called ‘inappropriate sinus’, incessant and uncontrollable, which mainly affects women aged 20 to 50 years. To correct it, the Irccs San Raffaele Hospital in Milan announces “the first hybrid surgery performed in Italy, conducted simultaneously with a minimally invasive surgical approach and electrophysiological cardiac mapping”. In the operating room a 21-year-old young woman who for 8 years had been living with this disabling syndrome, common to about 1% of the population. After 4 days the patient was discharged from the Cardiac Surgery Department for subsequent rehabilitation. The innovative hybrid intervention was performed by a multidisciplinary team coordinated by Elisabetta Lapenna, heart surgeon of the Heart Valve Center directed by Francesco Maisano, and by Manuela Cireddu, electrophysiologist and cardiologist of the Cardiac Arrhythmology and Electrophysiology Unit directed by Paolo della Bella, in collaboration with Carlo De Asmundis of the Heart Rhythm Management Center in Brussels and Mark La Meir, Head of the Department of Cardiac Surgery of the University Hospital of the Belgian capital. The operation represents “a very important result that once again highlights how multidisciplinary collaboration can bring continuous innovation, with ever more precise and personalized treatment strategies for our patients”, affirm Cireddu and Lapenna who with colleagues in Brussels, ‘fathers’ of the new procedure, have had specific training. Currently in the world there are about 300 cases treated in hybrid mode.The Tsi – explained by San Raffaele – originates in the sinoatrial node, the natural pacemaker that regulates the heartbeat. It is usually treated with drug therapy aimed at reducing heart rate (beta-blockers, calcium channel blockers or drugs selective on the function of the sinus node, including ivabradine), while in cases resistant to drugs, radiofrequency catheter ablations are performed. which, however, do not seem to have effective and lasting benefits. The hybrid intervention offers an alternative, “a new possibility of treatment – highlight the specialists – for this pathology that is difficult to recognize and treatable with only drugs or traditional approaches”. The minimally invasive operation, performed under general anesthesia – details a note from the Milanese IRCCS – was possible thanks to the integration and collaboration of the cardiac surgeon and electrophysiologist who operated simultaneously. In particular, through an access in thoracoscopy a modulation – by application of radiofrequency – of the conduction of the sinoatrial node, where the arrhythmia originates, was performed. However, simultaneous transcatheter mapping of the right atrium of the heart using a femoral venous approach was required to identify specific areas of action. This made it possible to identify and treat exclusively the cardiac areas in which the arrhythmia arises, avoiding the complications of traditional surgery including the implantation of the pacemaker and injury to the phrenic nerve.