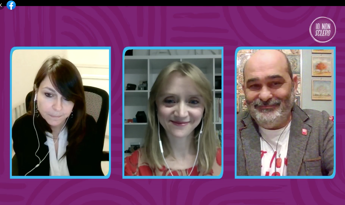 “Never give multiple sclerosis the leading role in our life, it would be a serious mistake”. This is the message from patients with MS, launched yesterday during the event broadcast live on the Facebook page of “Io non sclero”, the project developed by Biogen and the National Observatory on Women’s Health, in collaboration with the Italian Association multiple sclerosis and with the patronage of the Italian Society of Neurology. An opportunity for the online community to meet and which has turned the spotlight on the life paths of those who have been able to react to the uncertainty caused by the disease. ‘inspiration for all those who in this period experienced for the first time the uncertainty that the pandemic from Covid-19 has brought with it, those of Antonella Ferrari, actress and writer; Erika Narciso, nurse of 118 of Bologna, and Stefano Ghedini, a job as a consultant in Milan. “The greatest uncertainty that I had to deal with was the diagnosis – says Antonella Ferrari, author of the book ‘Stronger than destiny. and sequins. My fight against multiple sclerosis’ -. I started getting sick at the age of 11 but took nearly twenty to find out that I have MS. Then I had to govern a huge uncertainty which is that of feeling bad but not knowing what is happening to you. For the doctors my condition was due to stress, they told me that I had to go to the psychologist because mine were whims of a child to attract attention. But I was sick. Almost 20 years after the first hospitalization, the diagnosis finally arrived at the age of 29. A liberation, because uncertainty has turned into a very specific name, I was finally able to fight this enemy. The uncertainty disappeared with the response “. When the diagnosis arrived “from the relapsing remitting form I found myself dealing with a secondary progressive form – adds Ferrari – because I had not been treated and therefore my SM in the meantime went on. Fortunately, today the diagnosis is almost immediate, if you are treated immediately you can avoid getting to the progressive form. For me it was a blow but in the 90s, when MS was not yet as easily diagnosed as today, many found themselves in the same condition as me “. Also for Stefano Ghedini, 27 years old, born and raised in Bologna, and many projects for the future, SM showed up at the most beautiful moment of his life: “Four years ago – he remembers – a few days after graduating in Engineering, to perceive that there is something in me that is changing but I do not care, I was about to move to Milan. I played sports, I traveled, I had many friends and a thousand interests and, above all, dreams to realize: I did not imagine that at the age of 23, life could reserve any problem for me. I’m sick but I don’t worry, I go on but over time this condition knocks me out. After the diagnosis, however, the SM absorbs my whole life, but above all it completely occupies my mind. This is the worst time. I was completely focused on my condition which, on the other hand, must not become the protagonist of our existence. I understood this after spending a day at the beach with my old friends. From that day on I started not to worry only and exclusively about Sm and the fear of the future, I focused more on the present, I took back my interests that I had put aside, one of these has become my job, and to redo motor activity. I set myself small daily goals that still give me the right incentives to move forward ”. Who was used to governing uncertainty and unpredictability even before the diagnosis of Sm is Erika Narciso, a nurse, mother of two boys aged 15 and 17. “Since 1998 I have been working at 118 in Bologna, and since then I have to deal with the emergency every day – explains Erika Narciso – so I was ruling uncertainty even before I discovered I had Sm. Two years ago I had my first diagnosis of multiple sclerosis following optic neuritis, inflammation of the optic nerve. Fortunately, my calm nature helps me a lot to face every situation, to never lose my head. During the pandemic, thanks to my work, I learned that communication is fundamental. Moments of confrontation such as the meeting “Io non sclero” are very important to deal with the disease “. Also for Stefano “occasions such as the Fb Io non sclero event help to have a greater awareness that I did not have before – he says – Today I can finally say that I have the right incentives to move forward while before I never had positive thoughts”. Writing the book “I realized that sharing my frailties and my pain helped me to feel less alone and stronger. Confronting each other, even in this community, is medicine: a beautiful exchange and an opportunity for enrichment “, concludes Antonella Ferrari.

Omicron variant, Ecdc: “Out of 33 cases none serious and zero deaths”

One thought on “Multiple sclerosis patients, ‘never give disease the star role’”